This article appeared in the New York Times and is an excellent resource for grandparents going on a multigenerational family vacation.

How to Have a Fun, Multigenerational Family Vacation

Sometimes a trip with small children means the same chores in a different place. Here’s advice on how to make it a vacation. 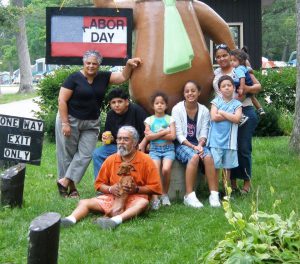 With 20 family members on their latest vacation, Emily Morgan’s family has figured out a system for dividing up the chores. Credit…Emily Morgan

Feeling released after a terrible year, this summer many families are hitting the road or taking to the skies with three or more generations, together.

How can family vacations live up to the name, providing time to feel close but also time off the clock? Parents who had children at home for remote school for much of the last year may ache for a chance to catch their breath. Grandparents yearn to be with their families at last, without feeling as if they’re operating a day care center.

Here’s how experts in family dynamics, and some grandparents and parents, suggest to best pull that off.

Talk through expectations in advance.

Elise Tarbi, 35, a nurse practitioner in Boston, took planning seriously. Before she, her husband and their 3-year-old shared a cabin in Maine with her parents for a week, she asked each adult to name a vacation goal.

“All I really wanted was some quiet time with coffee and a book, because that’s gone when you have a child,” she said. She achieved her goal, and so did her husband (who wanted a hike), her father (kayaking) and her mother (a nature preserve visit). Sometimes that meant doing things separately.

Mary Scott-Boria, 70, said her daughters “manage the cooking and the cleaning and the activities. I don’t have to be the responsible one.” Credit…Mary Boria

Every other summer, Emily Morgan, 61, the host of the podcast The Grand Life (on which this reporter has been a guest), and her husband, Mike, leave their Indiana home to spend five nights with their four grown children, spouses and grandchildren. They’ve visited Savannah, Ga.; Gatlinburg, Tenn., and coastal Maine.

“We told them, ‘One evening, we will watch the kids and you go out,’” Ms. Morgan said. “Which is a positive way of saying, ‘We’re not watching the kids every night.’”

At first, the older Morgans handled meals, but as their family expanded — to 20 people on their latest vacation — they began to wilt. Now, each adult couple takes full responsibility for one dinner during their stay, including menu, shopping, cooking and cleanup.

Discuss who pays for what.

On family trips, “there is very little money flowing uphill” to the older generation, Madonna Harrington Meyer, a Syracuse University sociologist and author of “Grandmothers at Work,” has found in her research.

Grandparents often default to picking up the tab, especially when children are visiting, but grandparents may be near or in retirement. Hosting costs can increase with each in-law and grandchild.

The senior Morgans used to shoulder vacation rentals, until their growing family meant bigger houses at higher prices. Now, they ask each family to pay one-fifth.

However, for the past few years, Donna and David Bolls, who live in Charlotte, N.C., have accepted a daughter’s invitation to join her family in a cottage on Seabrook Island, S.C. She declined their offer to pay part of the week’s rent.

“We try to grab the check if we go out to eat,” Ms. Bolls, 65, said. “Sometimes we split the groceries. We don’t want them footing the whole bill, even if they can afford it.” Caring for their grandchildren, 5-year-old twins, helps balance the ledger.

“People tend to fall back into their usual roles without thinking,” said Sally Tannen, an early childhood educator who for years has led the parenting and grandparenting workshops at the 92nd Street Y in Manhattan.

Adult children can regress, expecting their parents to take care of them and their children. “But you’re an adult now,” Ms. Tannen noted. Similarly, grandparents may anticipate being in charge, a recipe for conflict in close quarters. “We’ve always been the caregivers, and it’s hard to let go of,” she said. “We like to hold on to control.”

Like other experts, she cautioned that the middle generation sets the rules for their children, and that grandparents should defer and avoid criticizing those decisions.

When her toddler grandson wanted some of her maple ice cream — having recently moved to Vermont, Ms. Tannen and her husband are hosting children and grandchildren all summer — she asked his mother. “I was told to only give him two teaspoons,” she said. “I respected that.”

At the same time, grandparents may have lost some stamina or mobility.

Mary Scott-Boria, 70, and her husband live in Chicago, but own a small camper they park in a rural recreation facility 90 minutes away.

Lately, when they invite their children for a few days, “my daughters tend to take charge,” Ms. Scott-Boria said. “They manage the cooking and the cleaning and the activities. I don’t have to be the responsible one.” It’s meant change for the once undisputed matriarch, but “I’ve learned to be OK with it.”

Allow for down time.

When Rosie Cantu vacationed with three of her grandchildren on Bolivar Peninsula on the Texas Gulf Coast a few years back, everyone knew the rule: Afternoons, the children amused themselves with board games and puzzles while Lita (from “abuelita,” Spanish for grandmother) relaxed.

“That was my alone time and it re-energized me for the rest of the day,” said Ms. Cantu, 76, a semiretired teacher from San Antonio.

“It’s OK not to fill every minute,” said Kathryn Hirsh-Pasek, a psychologist at Temple University and a senior fellow at the Brookings Institution.

She and her husband, planning an excursion with their two grandchildren, expect to hear “I’m bored!” and won’t be fazed. “I will say, ‘it’s up to you to figure out how to fill this time.’”

Flexibility helps all parties enjoy themselves.

Ms. Tarbi and her husband packed their toddler son’s ‘OK to Wake’ clock, which turns green when he is allowed to get out of bed just after 7 a.m. They had been working for months to curtail his early rising.

But on their first day in Maine, her father — excited to be with his grandson — heard him chirping and forgot the clock. Shortly after 6 a.m., a no-longer-asleep Ms. Tarbi could hear them playing. She later reminded her father, who apologized, and “I had to get over it,” Ms. Tarbi said. “Some routines are not as important on vacation.”

What counts, experts and family members agree, is having time together, especially this year. It’s lovely to have unscheduled days when nobody has to rush to work or school, when there’s time for an impromptu ice cream cone or conversation or Scrabble game.

“Family vacations really matter,” Dr. Hirsh-Pasek said. “Building in-person relationships is invaluable.” To show grandchildren that other adults besides their parents love and care for them, to remind parents that someone else has their back, to build memories and traditions — that may be worth some compromises.