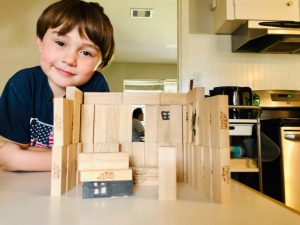 I met with Blaire Grady at a pool hall in Annandale, Virginia, where we intended to talk about my many projects. Blaire is an artist, a writer, and the founder of Strangers & Karma: an online literature & arts community. I wanted to show her a piece of my world, including Cuesion Fries – a local version of poutine with bulgogi & kim chee mixed in. Everything in Annandale has Korean mixed in. As it happens, so does Blaire’s family.

Blaire’s son Cassius is eight years old. He loves Lego builds, Matchbox cars, and he’s currently trying his hand at scaled model builds of houses. Every night for years, he and his mother would end the day with coloring in his coloring books. She’s taught him artistic tricks, but his passions are building and playing with his cars…tangibles. He also loves smashing Matchbox cars to create wreck scenes…apparently healthy behavior.

Racially, Cash is Asian, Native American, and European-American (White on the U.S. Census.)

Blaire said, “I asked Shawn (my husband) about it. He said Cash is marked white on many forms. He explained that if a form doesn’t offer an opportunity to check multiple races, the only sensible match is white, Caucasian or non-Hispanic. Shawn added that when he fills out forms for himself, being half Asian, he marks Asian. Another example is what I see on Cash’s doctor’s forms. I checked them last night in connection to this. He is listed as white, but I didn’t list him as white. This is where looking completely white, as my son does, gets misinterpreted. I often leave race and gender blank if nothing fits so that if it is important enough to know, I’ll be asked.”

Cash looks like his Caucasian mother. But his family life reflects his Korean heritage.

Blaire’s mother-in-law Suhani, or Sandy, is the family matriarch. Cash calls her “Harmony,” which is close to the Korean word for “grandmother,” 할머니 (halmeoni.) They have a family function for just about every major holiday, typically sharing a spread of Korean food such as marinated spare ribs, bulgogi, spicy cucumber, kimchi, cold spinach, and japchae (potato noodles with beef bits and chopped veggies.) Birthday cakes are typically purchased at H-Mart, a Korean grocery chain. Their cakes are totally different (and taste AMAZING) from American grocery store cakes.

Sandy was Cash’s full-time nanny for his first 18 months. She remains his closest family member, aside from his parents, who both work from home. But before Blaire quit full-time work when Cash was two years old, Sandy was practically Cash’s surrogate mother. There were times when he seemed confused as to who “momma” was.

Cash is enrolled in Taekwondo classes (blue belt) near Sandy’s residence; she and her husband take Cash to attend twice a week. Cash is equally close to Tae, Sandy’s husband, though there is a language barrier. Sandy interprets when necessary during activities between Tae and Cash.

Other times, Cash is usually with Harmony outside while she gardens or he’s watching TV while she cooks and cleans. She is mainly Cash’s source of love and care when at her house, as opposed to hands-on activities. They talk a lot (Cash is a talker, always chatting with people, especially with family members.) She runs his baths and lays with him until he falls asleep. At bedtime, they’ll pray together in English. She’ll cook his favorite food when it’s just them (spaghetti)… typical grandma stuff.

To Cash, family is family. Blaire and her husband Shawn keep interpersonal differences out of the conversation with regards to Cash’s understanding of that dynamic. Cash doesn’t see his maternal family much, all of whom live in Virginia (1200 miles away.)

I asked Blaire: Does he ever tell you things that intimate he’s aware of a division between Koreanness and white Americanness?

“We don’t pick out the differences, but he definitely knows the differences simply by sharing life with both white Americans and Koreans, among others. He knows what Korean food and culture and language are, and that it’s all different from “white American” culture. He notices Asian art and assumes it’s all Korean because Sandy’s house is decorated with Korean art and he sees the same accents when going places with Sandy, which is mostly Korean (Korean friends, Korean markets, restaurants, etc.) But she never pushes that culture on him. She and Tae use chopsticks while he’s given a fork. She hasn’t taught him Korean language outside the basic words. They don’t force Taekwondo on him, instead encourage it because it’s what they’re most familiar with in terms of sport.

“Cash started Montessori school at 20 months old, where he was one of just three or four white children. The school he attends teaches with a series called “SuperKids” which depicts diversity as a norm by design. Having friends from different races outside of our family’s and being in a school that is richly diverse has helped him to be used to all sorts of different cultures from a very young age. A few years ago, he drew a Black Santa. I asked what made him color Santa dark brown, and he said he just liked it better that way. That was a very proud moment for me as a parent, that he knows the difference and celebrates it.

“When he colors characters in coloring books, he uses different skin tones. I taught him this simply by being a portrait artist. When we‘ve gone to the art store, he’s re-upped on skin tone crayons because it’s become frustrating to him that the typical box of crayons doesn’t include varying skin tones. So without the skin tone crayons, he has to mix colors to get the he tone he wants, and sometimes it doesn’t come out to his liking.”

One last question: do you think there will come a time when you’ll have to discuss racism with Cash as he gets older? Here I’m thinking more of systemic racism, prejudice in the form of “rules and regulations.”

Blaire responded: “Yes. We’ve already had to have these conversations. Cash has always had an interest in police-themed toys, along with other first responders, but particularly with police. When he wanted to be a police officer for the second consecutive Halloween, which was on the heels of George Floyd’s death, we had to have a conversation.

The practice is as old as time, to give kids an idea of what should be as opposed to what really is, in an effort to maintain a rosy outlook on life. I personally feel that this can lead to the detriment of any child. We want to harness Cash’s interests, so we let him dress up as a police officer. We want him to feel comfortable going to the police if necessary. But we also want him to be cognizant of and sensitive to the feelings of others and why those feelings exist. So we told him what is happening, gave examples without calling it systemic racism, and why it was socially awkward to praise police as a whole.

As Cash grows, there will be other reasons to have more conversations, especially when he becomes old enough to vote. For now, we have them when absolutely necessary, considering his age and level of understanding.”

Blaire and I did eventually talk about my creative projects, but I really enjoyed this discussion more. My favorite part of the story is the kid who’s passionate about mixing crayon colors. I can’t imagine him accepting anyone’s cookie-cutter nonsense, and that is what I wish for future generations. It gives me hope. I feel like my generation hasn’t quite caught on.