Come To Vegas – a Long-Distance Grandma 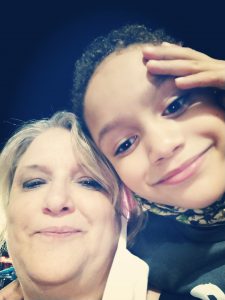 “Come meet us in Las Vegas.”

My daughter messaged me; she and my youngest grandson Ashton would be flying from Michigan to Vegas for six days. Alarms started pinging in my mind.

COVID-19 loomed over everything. I’d been laid off for months and was using savings to pay the bills. Nobody was responding to my job applications. My daughter was taking my grandson on an airplane during a pandemic. To Las Vegas.

“The flights are crazy cheap, Mom,” she said.

It was true – flights were cheap and seating was spread out to one person per row. The airlines and airports were taking extra precautions to assure everyone that they could fly safely. And my daughter’s plans were set. They were going, with or without me.

I realized this would be a rare opportunity to get one-on-one time with my grandson. His household in Michigan is bustling and urban, full of dogs and children and adults of all cultures – black, white, Muslim, Latino, Native American. He’d never been on an airplane before, and he’d never been to the desert. I know the center of America as tending less toward diversity, more toward Othering. I was a little excited about being available to answer questions, if he had any. He didn’t. He’s an introspective kid.

Las Vegas wasn’t bustling at all – I admit I was relieved. All businesses were enforcing 6-foot distance between patrons. Ashton was quite comfortable wearing his mask in all public areas, and not straying too far away from me. I expected, as an old white woman, to not be questioned about this not-completely-white child (the way some of my nonwhite friends have been with their mixed children or white stepkids.) I felt silly having these thoughts. Ashamed not of my grandson but of myself.

That’s the thing about being a multiracial grandparent – we’re all striving for diversity to be normal. It is normal. In my ideal world, people do see color: as something amazing and interesting about each other and about ourselves. We should never have to choose one identity out of everything we are.

Ashton and I went to the Mandalay Bay Aquarium without his momma and auntie.  Ashton is quiet, but he is not shy, not averse to other people. He knew a lot of facts about sharks, and liked reading the signs that described what lived in each tank. When we sat under a guitarfish for a much-needed (for me) rest, I asked him whether he wanted to study marine biology when he got older.

“Maybe,” he said, but he didn’t seem convinced. I only see this kid once in a year; I wasn’t going to impress my beliefs on him, but I wanted him to know that I thought science was very cool. I told him to find out what makes him really happy, and learn all he can about that. Ashton would have been a great poker player. He gave nothing away. Later I showed him how to use my phone to make a video of Las Vegas. I want him to understand arts as something he can do. I’ll save the ‘should do’ for later.

The next day we all went hiking in Calico Basin. I love this stuff but can only handle so much of it; Ashton’s momma is less enthused. We found comfortable rocks midway up the canyon wall while Ashton climbed higher with our guide, Las Vegas artist Steve Ganson. There was a cave, we were told, and I really wanted to see it, but I didn’t trust my old-woman body any further than I could see. Our guide took a cool picture of Ashton in the cave, and took him higher still. I saw my grandson on a rock, supported by the guide.

“Don’t turn around,” I said to my daughter. She turned. She did a pretty good job of not freaking out. Afterward we had lunch at Ganson’s house, and the artists taught Ashton about using spray cans to decorate a stick he’d brought back from the basin.

“Good parenting,” I joked with my daughter. “Take your kid to Vegas, teach him how to tag.” She laughed.

It’s hard to not be around to watch them grow, hard to not plant what I hope are little seeds of wisdom since I won’t be around to clarify things if my beliefs contradict what Ashton encounters in his everyday life. I can’t roll in and upend his life if I don’t approve of something, because I’ll be gone again soon.

I saw Ashton again in the summer, in Michigan, and I brought a piñata for the kids to smack around. Ashton showed me how he could slide down the front porch banister and land on his feet most of the time. I made video and laughed with him that his mom probably did not approve. That’s a grandma’s job, right? He told me he’d learned about Karma.

“You put good in the world and you get good back,” he said with a small smile, looking to me for confirmation.

“I don’t think that works.” His words dropped like a brick on my heart. I thought carefully before responding. He’s eight and has a lifetime of potential heartbreak ahead of him.

“It does, but it’s not that simple. Good and bad always come together. The good will come back to you, but it takes a long time. Longer than you’d think.”

He looked me in the eyes to check my sincerity, and I was glad he had that habit. I was glad to give him a bit of a template, show him what sincerity looks like. He nodded, and went back toward the piñata party.