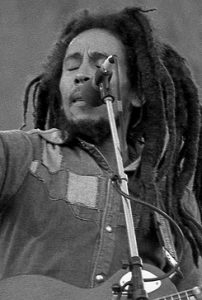 This week’s famous Friday is about Bob Marley. He was born on February 6, 1945 to Norval Marley (his father) and Cedella Malcom (his mother).  Norval Marley was from East Sussex, England and was a captain of the Royal Marines. Cedella Malcolm was an Afro-Jamaican. Bob Marley went to Stepney Primary School and Stepney Junior High School. In 1955 his father passed at the age of 70 from a heart attack. Later his mother remarried and gave birth to two boys (Marley’s half brothers) named Richard and Anthony. In Primary and Junior High School, Bob Marley and Neville Livingston (also known as Bunny Wailer) who were childhood friends, started to play music together. Bob Marley’s mother and Neville’s father soon moved in together and had a daughter named Claudette Pearl. Now that the two boys lived in the same house, their music explorations took them to the new ska music and the latest R&B from the United States radio stations from the United States. Eventually the boys formed a vocal group with Peter Tosh. The group was known as the Teenagers, the Wailing Rudeboys, the Wailing Wailers and then just the Wailers. Joe Higgs and Wilson lived close to Marley and were also a part of the group. Higgs started to teach Marley how to play the guitar. Between 1960 and 1970, Bob Marley moved to London and his group released the best of the Wailers. Soon after that his music started to gain international attention. Soon after the touring of Catching Fire and Burnin’, the group broke up but Bob Marley kept the name of the group and his music going. In 1984, The Legend Bob Marley’s greatest hits album was released and it became the best-selling reggae album of all time. In 1977, Marley was diagnosed with acral lentiginous melanoma. In 1981 he died because of the illness. He received a large funeral in Jamaica while many of his fans world wide expressed their grief.