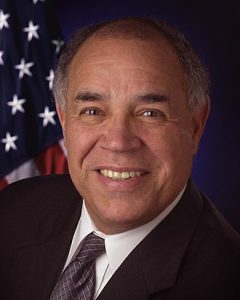 Hello and welcome back to this week’s Famous Friday!

Frederick D. Gregory was born January 7th, 1941, in Washington D.C. his father Francis A. Gregory was an educator and the first Black president of the D.C. public library board of trustees. His mother Nora Drew Gregory who was of Malagasy descent was also an educator and public library advocate. His uncle Charles R. Drew developed and improved blood storage techniques and helped develop large-scale blood banks during World War II saving thousands of lives.

Gregory was raised in Washington D.C. and attended Anacostia High School. He attended the United States Air Force Academy. There he received his Air Force commission and an undergraduate degree in military engineering. After graduating, Gregory went to a helicopter operation academy and became a pilot during the Vietnam war where he transitioned to a fighter aircraft. After this, he conducted testing as an engineering test pilot for both the Air Force and NASA. Throughout his time in the Air Force Gregory logged about 7,000 hours in more than 50 types of aircraft as a fighter and tester pilot while also flying 550 combat rescue missions in Vietnam. In his later personal life, he was married to Barbara Archer until her death in 2008. They had two children named Frederick D Jr and Heather Lynn. He is now married to Annette Becke and together they have three children and six grandchildren. Within his personal free time, he enjoys reading, boating, hiking, diving, biking, and traveling.

Gregory was selected as an astronaut in 1978 his assignment involved being an astronaut office representative at the Kennedy Space Center throughout the first orbit verification and take of assistance for STS-1 and STS-2. Along with this, it involved being a flight data manager, lead spacecraft communicator, and chief of operational safety. He was also one of the CAPCOM during the space shuttle Challenger tragedy. Along with this he was a veteran of three shuttle missions and has longed about 456 hours in space. He served as a pilot on STS-51B and also was the spacecraft commander on STS-33 and STS-44.  Later in his career, he was sworn in as NASA Deputy Administrator and was responsible for overall leadership planning and direction for the Agency.