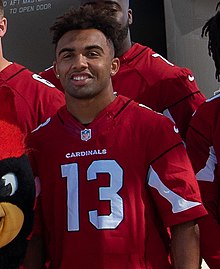 Christian Kirk, a wide receiver for the Jacksonville Jaguars, is a multiracial athlete from Scottsdale, Arizona. He was born November 18, 1996, and his father is Black, and his mother is White.  Kirk also played college football at Texas A&M but was drafted to the NFL before completing his senior year.

Christian Kirk played football at his high school, Saguaro High School and was drafted into the NFL in 2018. Here he was selected in the second round to play for the Arizona Cardinals. Earlier this year in March, Kirk signed to play for the Jacksonville Jaguars.

Although still gaining fame, Christian Kirk has already begun to use his platform to advocate for change and speak out against injustice. He has shared his experiences with racism and also how his former team, the Cardinals, went about discussing race and its member’s experiences with racism. Kirk commented on how growing up, “I’ve always been told from time to time that I wasn’t enough of either color…[yet I was] Black enough to feel unwelcomed in places that I walk[ed] into.” What has seemed to be a common theme for many multiracial people, including many we have written about here at Project Race, is the feeling or being told that we are “not enough” of one race or another. Kirk has decided to share his experiences and feelings with those online, in hopes of relating to those with similar experiences and bringing social change.