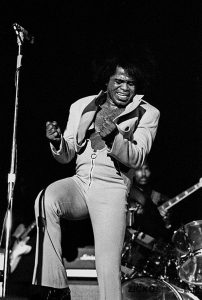 There was a man known by multiple names, some were, The Hardest working man in show business, Godfather of Soul, Mr. Dynamite, and Soul Brother No. 1. He influenced the development of several music genres, and his career lasted more than 50 years. He was one of the first 10 inductees into the Rock and Roll Hall of Fame. Yes, I’m talking about one of the world’s favorite singers, James Brown.

James was born on May 3, 1933, in Barnwell, South Carolina in a small wooden shack. His mother was Susie and his father Joseph Gardner Brown. Susie was of African American and Asian descent while his father was of African American and Native American descent. James’ full name is James Joseph Brown but his name should’ve been Joseph James Brown. His middle name and his first names were mistakenly reversed on his birth certificate. James grew up in extreme poverty in Elmo, South Carolina. James began singing in talent shows as a young child. He won his first show in 1944 after singing the ballad “So Long”. James began to entertain troops from Camp Gordon at the Start of World War II. This is where he first heard the musician Howlin’ Wolf play guitar. Soon after that he learned how to play the guitar, harmonica, and the piano. At the age of 16 he was convicted of robbery and was sent to a juvenile detention center in Toccoa. While in juvy, James created a gospel quartet with his four fellow cell mates. While playing a baseball game outside the detention center, James met a singer named Bobby Byrd. Byrd found out that James could sing after hearing James’ prison nickname “Music Box”. Brown was released from prison early on parole sponsored by the Toccoa business owner S.C. Lawson. Lawson was impressed with James’ work ethic and promised to keep him employed for at least two years.

In 1954 James joined Bobby Byrd’s group. The group evolved from the Gospel Starlighters to an R&B group named the Avons. In 1959 James recruited his first band and they named themselves the Famous Flames. In 1960 the band released a top 10 R&B hit called (Do The) Mashed Potatoes. In 1962 James and his band scored a hit with the cover of the instrumental “Night Train” becoming the Top 5 single. In 1970, most of his band walked out on him because of financial disagreements but James kept working on his music and finding other people to join his band and help produce his music. In 1973 James was about 2 million dollars in debt but through that he was able to make No 1 with two of his singles, “My Thang” and “Papa Don’t Take No Mess”.

Towards the end of his life, James had chronic Illness and type 1 diabetes. In 2004 he was diagnosed with prostate cancer but even with all that he still maintained his reputation as the “Hardest Working Man in Show Business”. On December 25, 2006 about 1:45 am, James passed from congestive heart failure. On December 28, 2006, James’ relatives, many celebrities, and thousands of fans gathered for a public Memorial service at the Apollo Theater. There were multiple other Memorials held in Georgia and South Carolina held for James and some of the celebrities that came to his memorials were, Michael Jackson, Jimmy Cliff, Joe Frazier, 50 Cent, Lil Wayne, Stevie Woners, Don King, and Prince. James Brown left a legacy behind and has many nicknames to go on with it.