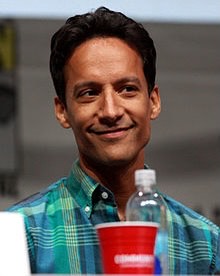 Happy Friday! This week’s Famous Friday is highlighting American actor and producer Danny Pudi. Daniel Mark Pudi was born March 10, 1989. He is of Polish and Indian descent. Both his parents immigrated to the US, his mother from Poland and his father from India. Along with his two siblings, Adam and Katherine, Pudi grew up on the South Side of Chicago, however he attended Notre Dame College Prep in a northern suburb.

Growing up as a biracial child in Chicago in the 80s, Pudi faced different views of his identity. He says, “inside my home, I’m very Polish. As soon as I left the door, in school and in public, I was pretty much perceived as Indian.” During his childhood, Pudi’s mother emphasized embracing himself and sticking out, rather than blending in with the “norm”. She had Pudi take violin and Polish dance lessons, so that he “would stick out even more than [he] already did” Pudi recalls.

Danny Pudi attended Marquette University in Milwaukee, Wisconsin. Here he earned a degree in theater and communications in 2001. Pudi won the Chris Farley Scholarship, leading him to take a further interest in improvisation, ultimately leading him to his career path today. Danny Pudi has been a part of a plethora of productions, from Captain America: The Winter Soldier, to the television series Community, to more recently the movie Flora & Ulysses, which was released just last year.

Pudi is married to his wife of 18 years, Bridget Showalter Pudi. Together they have twins, James Timothy and Fiona Leigh. Lastly, Danny Pudi recognizes how his community and family were safe spaces for him to embrace himself and his family’s differences as he grew up. Safe spaces are important for all of us to embrace our identity and celebrate ourselves. My hope is that Project RACE can be that safe space, and is helping foster the creation of more safe spaces – because we deserve to be embraced and celebrated!