Happy Friday Everyone! My name is Allan Rempel and today I am highlighting Roderick Woodson AKA Rod Woodson! 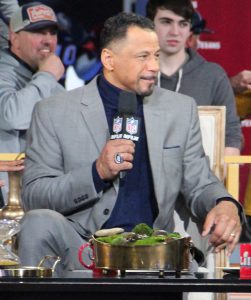 Rod Woodson was born on March 10, 1965. James Woodson (Rod’s dad) is African American and Linda Jo (Rod’s mom) is Caucasian. Rod is considered one of the greatest defensive players of all time.

Rod was drafted in 1987 by the Pittsburgh Steelers where he would play with them from 1987 to 1997. The year Rod was drafted he also won the bronze medal at the 1987 USA Olympic festival. Rod made his debut against the Kansas City Chiefs in a 17-16 victory. Rod finished his rookie season with 20 combined tackles in eight games. In the 1988-89 season, Rod would start all 16 games but the steelers had a record of 5-11, they went into the playoffs as the wildcard. Rod started his first playoff game against the Houston Oilers where they won 26-23, Rod had four kick returns for 74 yards. The following week the Steelers lost to the Denver Broncos 24-23.

On March 1, 1993, Rod received a $1.1 million settlement from the NFL after being one of 15 plaintiffs to sue the league in a class action antitrust lawsuit.

On September 3, 1995, Rod tore his ACL. This year the Steelers made it to the Super Bowl Final where Rod would come back from injury. The Steelers would lose 27-17 to the Dallas Cowboys.

In 2002  Rod joined the Oakland Raiders. They made it to the Super Bowl where they lost 48-21 to the Tampa Bay Buccaneers. In 2003 Rod retired from the NFL.

It is so cool to see the remarkable career of Rod Woodson! Happy Friday everyone!