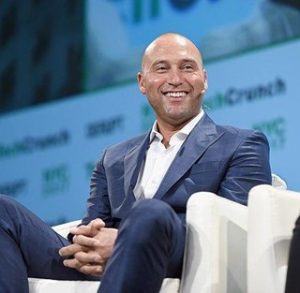 This week’s Famous Friday is about Derek Jeter, a former professional baseball player who was one of the best in MLB history. Derek was born on June 26, 1974 in Pequannock, New Jersey. His mother Dorthy is of English, German, and Irish ancestry. His father Sanderson is African American. Dorthy is an accountant and Sanderson is a substance abuse counselor. Derek’s father played baseball at  Fisk University as a shortstop. Derek also has a younger sister named Sharlee. In high school Sharlee became a softball star. Derek and his family lived in New Jersey until Derek was 4 years old, from there he and his family moved to Kalamazoo, Michigan.

Derek started off by playing little league baseball. Every summer he would visit his grandparents and they would watch the New York Yankees. He became one of their biggest fans. His favorite player who became his idol was Dave Winfield. In high school he ran cross country in the fall, played basketball in the winter, and played baseball in the spring. In his senior year he made 23 runs, 21 walks, four home runs, 12 stolen bases, and only 1 strike out. He received multiple honors for baseball his senior year including the 1992 Gatorade High school Player of the year award and USA Today’s High School Player of the Year. Derek received a baseball scholarship from University of Michigan to play for the Michigan Wolverines. The Yankees drafted Derek right out of high school in 1992 but started playing for them in 1995 at age 20. The following year he won the Rookie of the Year award and helped the team win the 1996 World Series. Through the years that he played for the New York Yankees Derek finished third in voting for the American League Most Valuable Player Award. He also won All-Star Game MVP and World Series MVP Awards. He served as the Yankees team Captain from 2003 until his retirement in 2014. He received nicknames such as “Captain Clutch” and “Mr. November” because of his amazing play in the postseason. Derek was a five time World Series Champion and has been known as one of the primary contributors to the Yankees success from the 1990’s to the 2000’s. Derek I total for the Yankees has 3,456 hits, 544 Doubles, 2,747 games played, and 358 stolen bases. Derek was the 28th player to reach 3000 hits and finished his career ranked sixth in MLB history. After retiring in 2014, the Yankees retired his uniform number 2.