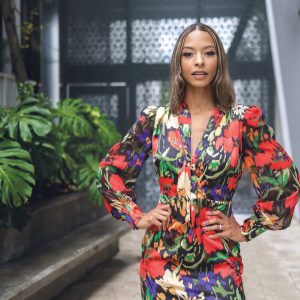 Happy Friday! This week’s article is highlighting two-time Emmy nominated Journalist Constance Jones! She was born July 3, 1983 in Stuttgart, Germany. Jones is of German and African American decent. Her parents, Ursula and George, were married almost 50 years ago, just a few years after the Loving v Virginia Supreme Court case, leading to the ruling that the banning of interracial marriages was unconstitutional.

Constance Jones has over 16 years of Journalism experience and is currently the anchor for NBC 6 Today’s Miami, Florida weekday morning newscasts. Prior to working here, she has worked for several news channels in places such as Oklahoma City, Atlanta, New York City and Miami, where she returned to. Jones gained her education at Politehnica University of Timisoara during a Democracy Student Exchange Program. She also attended Sam Houston State University and graduated with a Bachelors of Fine Arts in Television, Radio and Digital Communication. Besides television, Constance Jones worked a the Communications Director for the 17th Judicial Circuit of Florida alongside the Broward State Attorney.

Throughout her career as a Journalist, Jones has received several awards and acknowledgements. Among these accomplishments are, an award from the Texas Associated Press for her reporting work, honor from the National Academy of Television Arts and Science, and several recognitions and awards from the National Association of Black Journalists for Excellence in News Reporting. Jones was even included in Miami’s “40 under 40 Leaders of Tomorrow” in Legacy Magazine.

Constance Jones married her husband, Troy Simmons who is an artist. Outside of being a news anchor, Jones loves to crochet and run! I’d like to close the article with a quick note: having a biracial woman on television, like Constanace Jones, is uplifting and empowering. It allows young women and girls to see themselves represented in society, and sends the message that they are needed and wanted!