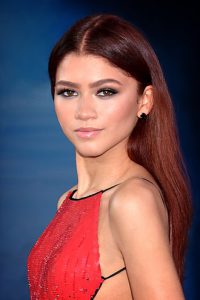 Zendaya Maree Stoermer Coleman was born on September 1, 1996, and is a popular American actress and singer. Her father is African-American with roots in Arkansas and her mother has German and Scottish ancestry.

Zendaya attended Oakland School for the Arts and while still a student, was cast in several roles in area theaters. She studied at the CalShakes Conservatory program and at the American Conservatory Theater.  In November 2009, she auditioned for the role of CeCe Jones in the Disney sitcom Shake it Up and she was selected to play Rocky Blue. Its premiere was watched by 6.2 million viewers, becoming Disney Channel’s second highest-rated premiere in Disney Channel’s 27-year history.

Zendaya’s first film role was in Frenemies and her self-titled debut album was released on September 17, 2013.

Zendaya’s list of awards and nominations is very long and impressive. In September 2020, she entered talks to play Ronettes frontwoman Ronnie Spector. She will produce and star in A White Lie, as Anita Hemmings, a woman who was a descendant of slaves and Europeans and passed as white to attend Vassar College in the 1890s.

It has been announced that Zendaya is set to star in and produce Challengers, a sports drama, which is scheduled to be released on August 11, 2023. She will also star in Dune: Part Two, which is set to be released on November 17, 2023. Zendaya was included on Time magazines annual list of the 100 most influential people in the world in 2022. We will certainly keep watching this fantastic Multiracial actress and singer.