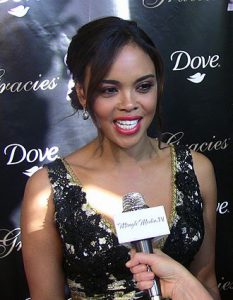 Hello and welcome back to this week’s Famous Friday. We are highlighting Sharon Leal who is a multiracial actress and singer.

Leal was born in Tuson Arizona to her mother Angelita who is Philippina and Her father who was an African American military policeman. Her father separated with her mother before Sharon was born. Sometime after, her mother married Jesse Leal who was a Master Sergeant in the US Air Force and he legally adopted Sharon.

She has been in many movies and TV programs throughout her life. Her first major acting role was the role of Dahlia Crede in the show Guided Light. Shortly after she joined the company of Rent on Broadway and was later casted as Mimi in the San Fransico sector of the first national tour of Rent. She also appeared in the production Bright Lights, Big City alongside Jesse L. Martin and Patrick Wilson. In 2001 she appeared on the recording of Making Tracks. From 2000-2004 she was in the TV series Boston Public.

She returned to Broadway and co-stared in the revival of the musical Dreamgirls as Michelle Morris.  Michelle Morris was Effie Whites replacement in the pop group The Dreams, alongside Beyonce, Jennifer Hudson, Eddie Murphy and Jamie Foxx. In 2007 she made a big debut in the film This Christmas and the production Why Did I Get Married? In her personal life she has a son named Kai who was born to her and her former husband Bev Land in 2001. She began a foundation with one of her former co-workers from Guiding Light Yvonna Wright, in which they created a local production of Dreamgirls in their hometown.