Happy Friday Everyone! My name is Allan Rempel and today I am highlighting Jude Bellingham! 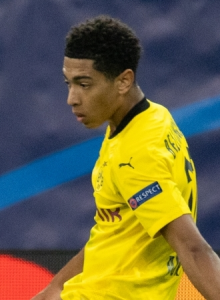 Jude Bellingham is a soccer player who plays for Borussia Dortmund. Bellingham was born in Stourbridge, West Midlands, in 2003. Jude’s father is European while his mother is African.

Jude played with Birmingham’s youth academy for the U8s. Jude made his debut for the U23 team when he was just 15 years old. Jude would continue playing for the academy until he was sixteen when he played with the first team. Jude became the youngest ever goal scorer when he scored the winning goal against Stoke City. Jude ended up having 44 appearances with the first team.

Jude ended up moving to the team Borrusia Dortmund in July of 2020. Jude would have a successful career where he would beat the previous record of youngest player to start in a champions league match.

Jude also had a very successful international career where he would be the youngest player to appear for the England U21 squad. Jude made his first appearance for the Senior England National Team where he would play against the Republic of Ireland. When he made an appearance in the Euro 2020 against Croatia he became the youngest Englishman to play in a serious tournament.

It’s so cool that we are seeing biracial excelling in sports. I can’t wait to see Jude Bellingham break more records!