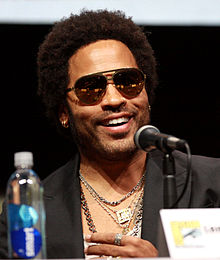 Happy Friday and the beginning of a new month! Today we highlight performer, well-rounded artist, record producer and actor, Lenny Kravitz. He was born May 26, 1964, in New York City to a father of Russian Jewish descent and a mother of Afro-Bahamian and African American descent.

Surrounded by music from such a young age, from going to Church to his father being a free-lance jazz promoter to his parents overall love for different music genres including Classical, R&B and Blues to name a few, it was inevitable that Kravitz would pursue music as a career. His mother even encouraged him to pursue different choir groups while they lived in California during his high school years. He graduated high school in 1982.

Kravitz returned to NYC in the late 80s in order to pursue a career in music. In 1989, Lenny signed a contract with Virgin Records and produced his debut album “Let Love Rule”. However, he really broke into the music industry with his second album “Mama Said.”

Returning to NYC in the late 80s allowed Lenny to meet and marry Lisa Bonet. Together they had their daughter Zoë. Unfortunately, the couple would divorce in 1992. This hurt greatly influenced the album “Mama Said.”

Throughout his music career, Kravitz has produced music often criticized by the public. Some critics said his music was closer to what White people were producing, rather than Black people. Others laughed asking “What are you doing?”, not used to his style of music. His music, which has been found on alternative-music radio stations, helps challenge the idea that all Black artists sound a certain way. Lenny Kravitz recognizes the origin of Rock n Roll, invented by Black people, but also sees the amazing music produced by White people. He gives credit to both sides and believes “Black people shouldn’t throw their music away.”

Lenny Kravitz music, throughout the different genres he has explored from soul to rock to psychedelia, and his different influences, from the Beatles to his parents, he has maintained a main message across his albums: Love and Peace. Throughout his career thus far, Kravitz has earned several awards and recognitions including, a BRIT award for best international singer on his 3rd album and four Grammys, one of which was for Best Male Vocal Rock Performance after the release of his single “Fly Away” and album “5”. He has also worked alongside many other notable artists such as Michael Jackson, David Bowie, Mick Jagger and Jay-Z – just to name a few! Besides his accomplished music career, Kravitz has stepped into the acting scene a bit with roles in Precious (2009) and two Hunger Games movies, among other films.

To end, I wanted to voice my admiration for Lenny Kravitz’ originality and ability to be himself. In a world full of trends and people telling you what to do or who to be, Lenny has chosen to be himself and not let others define who he is or his music.