Hello and welcome to this week’s Famous Friday! 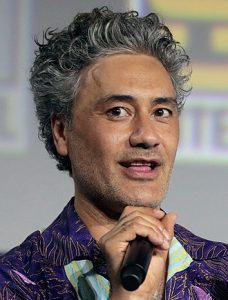 This week we will be highlighting Taika David Cohen who is professionally known as Taika Waititi. He is a New Zealand actor-comedian and filmmaker who has received many awards such as a Grammy Award, a British Academy Film Award, and an Academy Award for his many works. Two of his works, Hunt for the Wilder People and Boy have each been top films, and Time Magazine named him among the top 100 influential people in the world in 2022.

Cohen was born on August 16th, 1975 in Raukokore, a settlement located on the East Cape of New Zealand’s North Island. His Father is of Māori descent, which is a group of Indigenous Polynesian people who are native to New Zealand, and of French-Canadian descent. His Mother’s family were Russian Jews along with a mixture of other European ancestries. Growing up he described himself as Polynesian Jewish and grew up in both Raukokore and the capital city of Wellington. In his college years, he attended Onslow College and then studies theatre at Victoria University of Wellington where he graduated with a bachelor’s degree in arts in 1997.

Currently, in his career as a director, he has produced, directed, and co-directed a number of films for which he has been recognized for. Some of the most recent and popular films that he has worked on have been The Mandalorian, Thor Ragnarok, Thor Love, and Thunder.  He wrote the screenplay for Disney’s Moana and at this time he is in the process of directing, writing, and producing a sports comedy-drama titled Next Goal Wins.