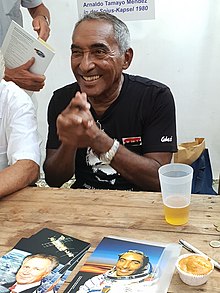 Happy Friday everyone! This week’s Famous Friday will be about Arnaldo Tamayo Méndez. He was born on January 29th, 1942 and is of Afro-Cuban descent. He is the first person of African descent, first Latin American, first Cuban citizen and first person from a country in the Western Hemisphere other than the US to go to space!

Tamayo Méndez was born in the Baracoa, Guantánamo province, of Cuba and unfortunately orphaned during infancy. However, he was cared for by his grandmother, Mariana, his aunt, Esperanza Méndez, and uncle, Rafael Tamayo. His uncle became his legal guardian when he was 9. He began working as a child, doing shoe shining, selling vegetables and eventually became the assistant to a carpenter.

During Arnaldo’s childhood, the Cuban Revolution was underway and he saw it first hand. In fact, he saw the coup d’etat occur when he was 10. After the revolution, Tamayo Méndez joined the Cuban Air force as a pilot in 1959. 2 years later, he went to the Soviet Union for training, and during the Cuban Missile Crisis in 1962, he flew 20 reconnaissance missions for the USSR. He continued to fly for the next 15 years, even rising the ranks to become captain in Cuba’s air force. In March of 1978, Arnaldo was selected as a candidate to be cosmonaut in the Soviet Union’s Intercosmos program.

On September 18th, 1980, Arnaldo Tamayo Méndez flew into space aboard the Soyuz 38 with Yury Romanenko. After returning to earth, Arnaldo was awarded the first title of Hero of the Republic of Cuba, as well as Hero of the Soviet Union and the Order of Lenin – the last being the highest recognition a civilian could be given by the Soviet Union.

After this flight, Tamayo Méndez returned to the Cuban air force. He even rose to the position of brigadier general. He was also appointed chairman of the Military-Patriotic Educational Society, or SEMPI, in 1982. He has served in the Cuban National Assembly as deputy for his home province. Today, he is 80 and is married with two children.

It’s amazing to see a multiracial person break records such as Arnaldo Tamayo Méndez, and be awarded for their accomplishments – giving honor where honor is due! When one person in the  multiracial community is recognized, it paves the way for inclusion and for more people to be recognized for their contributions to society!