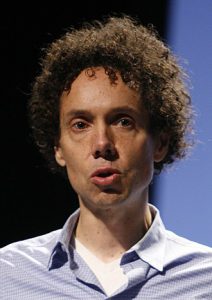 Welcome back to Famous Friday! This week we will be highlighting the Canadian journalist, public speaker, and author of five New York Times best sellers Malcolm Gladwell.

Malcolm Timothy Gladwell was born September 3rd, 1963, in Hampshire England, to an English father Graham, who was a mathematics professor, and Jamaican Mother Joyce, who was a psychotherapist. When Gladwell was 6 years old, his family moved to Elmira, Ontario in Canada. As a young boy, he was described as ambitious and single-minded. He would be drawn to reading and spending time at libraries, having a unique outlook on the perspectives and curiosity of life. Later on in his life, he was an intern at the National Journalism Center in Washington D.C.

Two years later he graduated from the University of Toronto in 1984 with a bachelor’s degree in History. He originally planned to pursue graduate school however his grades were not high enough, so he decided to look for an advertising career. After much searching, he decided to settle for a journalism position at The American Spectator and moved to Indiana. He also wrote for the magazine Insight on the News, and in 1987 he covered science and business for the Washington Post where he worked until 1996. The same year he started for The New Yorker where he wrote two articles “The Coolhunt”, and “The Tipping Point” which prompted him to write the first book that he titled The Tipping Point.

The Tipping point was Gladwell’s first book, released in 2000. It discusses how little things can make a big difference. This introduces the theory that explains advertising and how trends begin and why they have a ripple effect to influence such a broad expansion of individuals.

His second book, “Blink,” was published in 2005. This book explains how the unconscious mind interprets experiences along with how past experiences can lead people to make complex decisions and assumptions at a rapid pace.

His third book, published in 2008, observes how an individual’s environment and personal drive will affect their opportunities for success. It goes deep into the meanings of why successful people are where they are and the reasoning behind how they reached that success point.

Along with these works he has several other award-winning books, such as David and Goliath, Talking to Stranger, and The Bomber Mafia.  Aside from Having his first five books on the New York Times best sellers list, He is also the host of a podcast called Revisioning History. This podcast has 49 episodes and observes the neglected and misconceived, examining the small details of such an elaborate expansive historical point of view.