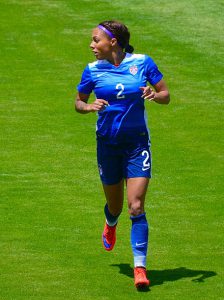 Happy Friday Everyone! My name is Allan Rempel and today I am highlighting Sydney Leroux!

Sydney Leroux plays professional soccer in the NWSL and for the USA. Leroux was born in Surrey, British Columbia, on May 7th, 1990, to a white Canadian mother and a Black American father. Up until 2008, Leroux would represent the Canadian youth national team, where she would switch to the American u-20 squad. She joined the senior team in 2012.

When Sydney Leroux was 15 she played for the Vancouver Whitecaps and became the youngest player ever to play on that team. Leroux played college soccer for UCLA in division one, for one year, was the number one pick in the 2021 WPS draft, and was drafted by the Atlanta Beat. After the WPS was suspended, Leroux played for Seattle Sounders Women.

In 2013 she made her debut for the Seattle Sounders Women in the NWSL, that season they ended up winning the regular season. In the 2014 season, she was traded to Western New York Flash and in the 2015 season, Leroux was traded to FC Kansas City. Leroux missed the 2016 season because she became pregnant. They missed the playoffs in the 2017 season.

In 2018 Leroux was traded to Orlando Pride. She became pregnant at the end of 2018. She made her return in the 2019 season just 3 months after being pregnant in the 89th minute. In 2022 she was bought by Angel City FC.

Sydney Leroux has amazing feats with the US team. She made her debut in 2012 and has had over 75 appearances, and won the 2012 Olympics and the 2015 World Cup.

Sydney Leroux’s journey is truly inspiring with how she kept playing after two pregnancies showing women can really do anything! I hope you all have a wonderful Friday!