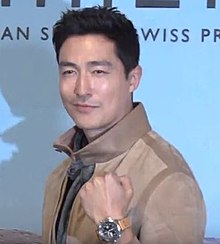 Happy Friday everyone! This week’s Famous Friday is highlighting Jeom Deok-su or Daniel Henney, an American actor and model of British, Irish and Korean descent. He was born on November 28, 1979 in Carson City, Michigan.

Growing up as half-Asian in this small town in Michigan was hard for Henney. He recalls facing racism specifically from classmates – from slurs and taunting to even fights. Despite the mistreatment he faced, he ultimately sees it as something that made him stronger. During high school he was a great student and athlete. He played for his school’s basketball team, and even helped bring his team to the MHSAA Central region as 2nd place his senior year. Henney even received scholarships for basketball from Albion and Alma College.

After high school he attended a few colleges including the ones previously mentioned and Elgin Community College. While doing so, he began his modeling career. Eventually he left college due to family circumstances and to pursue modeling full time, even touring France, Hong Kong, Italy and the US. Henney began his acting career with a small cameo in 2005, however, that same year he debuted with a whole role in the South Korean television series My Lovely Sam Soon, as Dr. Henry Kim. From here, audiences began to know and love Daniel. Henney has gone on to do several South Korean and American films including, My Father, X Men Origins: Wolverine, Shanghai Calling, The Last Stand (where he got to work with Arnold Schwarzenegger!), and Big Hero 6, among several others. Also, in 2015 he joined the cast of Criminal Minds as Matthew Simmons (a biracial character and a role he is very proud of!), furthering his popularity!

As a Korean-American actor, Daniel Henney feels the need to lift up, encourage and spur on young Asian actors. In his most recent project, The Wheel of Time, Daniel plays Lan Mandragoran. This role is one of a positive male figure. He appreciates this role because Lan Mandragoran is powerful, yet humble, all the while still masculine, and Henney is very pleased to be a part of the television series.  To see an actor who uses their platform to be an example and uplift others, specifically the younger generations, is definitely encouraging to me! You can see Daniel Henney in The Wheel of Time on Amazon Prime.