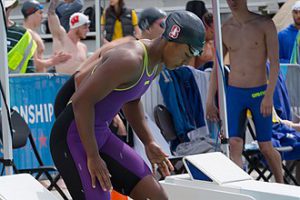 Hello everyone and welcome back to Famous Friday! Today we will be highlighting former Olympic swimmer Lia Neal, who is a multiracial Olympic medalist. She was born in Brooklyn, New York on February 13th, 1995 to Chinese mother Siu and African-American father Jerome. In her early life she went to high school at Convent of the Sacred Heart School in New York City. Here she was a part of the Asphalt Green Unified Aquatics swim team. When she was 13 years old, she participated in the 2008 Olympic trials in Omaha, Nebraska in which she placed 28th in the 50-meter freestyle and 78th in the 100-meter freestyle. In 2012 in the Olympic trials, she qualified for the 4 x 100 after finishing fourth place in the 100-meter freestyle with a time of 54.33 seconds. At 17 years old she became the second female African- American to qualify for a U.S. Olympic swimming team.

At the 2012 summer Olympics, she won a bronze medal with her teammates Missy Franklin, Jessica Hardy, and Allison Schmitt. This same year as a senior in high school, she became the first person from her high school that had ever participated in the Olympic Games. In 2015, she became one of the first multiracial women to place in the top three in the 100-yard freestyle in any division at the NCAA swimming championship. In 2016 she won a silver medal at the Rio de Janeiro Olympic Games in the 4 x 100 freestyle.  From 2013 to 2017 Neal competed at the college level for Stanford University where she became an 8-time NCAA champion. In 2020 she was on a podcast called SwimSwam in which she dived deeper into the sport of swimming with other swimmers. In May of 2021, she announced her retirement from the swimming field; however, she continuously raises awareness about how important it is to have diversity throughout sports, as she continually works to make the swimming community a reachable and communicative group.