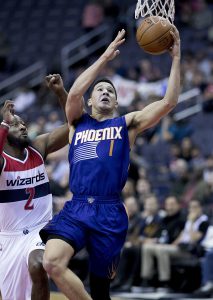 Happy Friday Everyone! My name is Allan Rempel and today I am highlighting Devin Booker!

Booker went to the high school Moss point where ESPN rated Booker a 5-star recruit. Devin Booker went to Kentucky and in the 2014-15 season averaged 10 points, 2 rebounds, and 1.1 assists per in 21.5 minutes a game. After a year at Kentucky Booker declared for the 2015 NBA Draft, where he would be the 13th overall pick by the Phoenix Suns.

During Booker’s 2015/16 rookie season he became the third youngest player to ever score 30 points in a single match. He also became the fourth youngest player to score 1,000 career points. Devin Booker also played for the US men’s national basketball team in the 2016 Rising Stars Challenge.

In the beginning of the 2018-19 Devin Booker was in and out for the beginning of the season due to injury. Although on January 24th, Booker became the fifth youngest player to get 5,000 career points. On March 27th he scored 50 points in a 124-121 loss against the Wizards, becoming the youngest NBA player in NBA history with consecutive 50-point games.

In the 2019-20 season, Devin Booker broke a franchise record for most consecutive 30+ point games in a row, beating a record previously set by Charlie Scott twice and Charles Barkley once. On January 28th Booker became the fourth youngest player to reach 7,000 career points.

In the 2020-21 season, May 23rd, Booker made his play off debut scoring 34 points against the Los Angeles Lakers. On June 3rd, Booker recorded a playoff career-high 47 points to beat the Lakers in Game 6 113-100. They made it all the way to the NBA finals where they lost to the Milwaukee Bucks.

In the 2021-22 NBA season Booker was named an All-Star for the third year in a row.  In the play offs the Suns won against the New Orleans Pelicans in the first two games, but Devin Booker sustained an injury, and missed the next 3 games. The Suns clinched the Western Conference Semifinals where they lost to the Dallas Mavericks.

I can’t wait to see what amazing things Devin Booker will do next season!