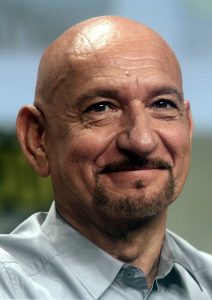 Hello everyone and welcome back to Famous Friday! Today we will be highlighting Ben Kingsley who is a famous English actor. Throughout his career which has progressed over the course of five decades, he has received many awards for his work.

Born to an English mother and Gujarati father, in Snainton, North Riding of Yorkshire on December 31st, 1943. He was the son of Anna Lyna Mary who was an actress and model and to his father Rahimtulla Harji Bhanji. Kingsley’s original name given to him at birth was Krishna Pandit Bhanji.

In the makings of his early career, he studied at De La Salle College in Salford, where he became involved in amateur dramatics within the city of Manchester and eventually made a professional debut at the age of 23. He received interest from manager Dick James who offered to turn him into a pop star however Kingsley chose to be a part of the Royal Shakespeare Company after an audition. For the next 15 years, he would devote himself to stage work and performed in many productions such as Aldwych, As You Like It, Much Ado About Nothing, Richard III, The Tempest, A Midsummer Night’s Dream, and many others. In the 1960s he changed his name to Ben Kingsley, fearing that a foreign name would alter and impact his career. He later discussed in an interview how changing his name heavily affected his popularity and the number of auditions he received.

Later on in his career in 1984 Kingsley won a Grammy Award for Best Spoken Word or Nonmusical Recording, which he did for The Words of Gandhi, and received an honorary degree of m Stanford University. He also earned a series of accolades throughout his career such as an Academy Award, a Screen actors Guild Award, a British Academy Film Award, a Grammy Award, and Two Golden Globe Awards. Ben Kingsley has participated in a large number of films throughout his career one of the most recent was being a part of the Universe Shang Chi and the Legend of the 10 Rings, which was released in September of 2021.  After many years of acting, Ben Kingsley constantly to inspire many as he continues to pursue his passion for acting throughout many decades of work.