Happy Friday Everyone! My name is Allan Rempel and today I am highlighting Dele Alli! 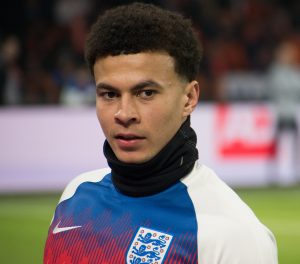 Dele Alli was born on April 11th 1996. Alli is an English soccer player who plays for Everton at the moment. Alli’s dad is Black and his mom is White.

Dele Alli joined the youth team of Milton Keynes Dons when he was 11 years old. He made his debut for the youth team as a sixteen-year-old on November 2nd 2012 as a substitute, in the FA cup against Cambridge City.

In the 2013-14 season Dele Alli would play for the first team of MK Dons regularly. Alli started his first match for MK Dons in the 2013-14 season against Shrewsbury Town that ended in a 0-0 tie. In Dele Alli’s first Football League Trophy (an annual English association soccer knock out competition to the 48 clubs in the EFL League one and EFL League Two) appearance, Alli scored in a 2-0 win against Northampton Town to send them to the second round of the tournament.

In the 2014-15 Alli had his last season with MK Dons. Alli became the first-choice central midfielder. In the League cup MK Don beat Manchester United 4-0, this was very historic because Manchester United is one of the ‘big six’ teams. In the same season Dele Alli transferred to Tottenham Hotspur but put on loan to MK Dons, where he stayed for the rest of the season.

In the 15-16 season, Delle made his tottenham debut on August 8th 2015, against Manchester United in the Premier League as a substitute in a 1-0 defeat away at Old Trafford. After that loss Dele Alli had a very successful premier league season debut, this won him PFA  Young player of the Year.

In the 2016-17 season Dele Alli scored his first Champions League goal against CSKA Moscow at the same stadium where they lost 1-2 to AS Monaco. In the 2018-19 season Dele Alli signed a new six-year deal at Tottenham which would keep him at the club until 2024.

Alli missed the start of the 2019-20 season due to an injury in his hamstring. This season Mauricio Pochettino (the coach) was replaced by José Mourinho. Mourinho played Alli as an attacking player just behind Harry Kane. The attacking role gave Alli greater freedom to score. In his first 3 games with Mourinho he scored three goals.

In the 2021-2022 season Alli was transferred to Everton. He made his debut for Everton on February 8th.

I hope you learned a lot about Dele Alli! Happy Friday!