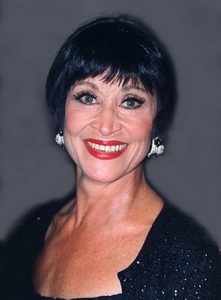 Anyone a theater kid here? Just me? Ok, well hopefully you at least like musicals! Today we are highlighting Dolores Conchita Figueroa del Rivero Anderson. Known as Chita Rivera, she is a dancer, singer and musical theater actress born January 23, 1933. Rivera is of Puerto Rican, Italian and Scottish descent.

Chita began pursuing the arts from a young age, as she began ballet lessons when she was 11. When she was 16, Rivera won a scholarship to American School of Ballet in New York City, after auditioning for choreographer George Balanchine. Just three years later Chita was cast in Guys and Dolls as the principal dancer. From here, she has performed in several Broadway productions, including Call Me Madam, Can-Can, Mr. Wonderful, as well as originating the role of Anita in West Side Story. Also, she starred in Bye-Bye Birdie as Rose Grant with co-star Dick Van Dyke in 1960 and reprising her role in 1961 in London’s West End production. The list could go on for a while and these plays were only during her twenties! After her twenties she has been in Threepenny Opera, Chicago (as Velma Kelly) and several other productions, including a movie.

During the 1980s Chita won her first Tony for her performance in The Rink (1984) as Anna. Chita received her second Tony Award for her performance for her role in Kiss of the Spider Woman. Along with this, Rivera has received multiple Tony nominations. Furthermore, she received the Tony Award for Lifetime Achievement. Now top it off, she received a Presidential Medal of Freedom and was the first Latina and Latin American to receive a Kennedy Center Honors.