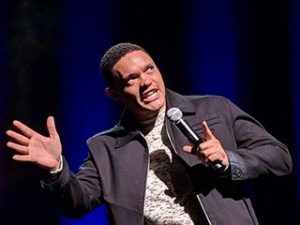 Trevor Noah was born on February 20th, 1984in Johannesburg, South Africa during the time of the apartheid. His mother was a very intelligent and religious woman. His mother, Patricia Nombuyiselo Noah, was African and his father, Robert, was Swedish/German. Trevor grew up with his mother, grandmother, who basically ran the whole family, his blind great-grandmother Koko, as well as his cousins. When he and his parents would walk to the park or just go on a walk in general, his parents would have to walk on opposite sides of the road just to keep suspicion off of them because they weren’t supposed to be together as well as have a child together. Trevor’s mom would even go to the extent of walking a few paces behind him so that people wouldn’t draw the conclusion of them knowing each other but would stay close enough to make sure that he wouldn’t run off. There were a couple times in his childhood when he would try to run up to his father, happily yelling “DAAADDDDYYYYYYY” and then his father would look over his shoulder with fear in his eyes and Trevor’s mother would have to run up behind Trevor and grab him to stop him from getting to his father.

As Trevor got older he became more of a trouble maker and his mother gave him spankings. But before his mother gave him spankings Trevor would try to make a run for it and when he was young his mother would catch him but as he got older he would get stronger and faster. Eventually his mother would have to kick her heels off and get into “super speed mode”. Eventually Trevor became too fast for her so when Trevor would run from her she would scream “Thief, Thief” and eventually the whole town was chasing Trevor. During the apartheid many people would be killed by either getting set on fire with tires or shot or other ways. Trevor’s mother did not deal with that at all, if she passed something like that going on and someone stopped her she would say, “I’m not a part of this let me go” and they would. Above all Trevor’s mom loved him very deeply and kept him safe no matter the circumstance. Eventually Trevor grew up to be a well-known comedian and also wrote a book called Born a Crime. Trevor won many awards and has his own show called The Daily Show.