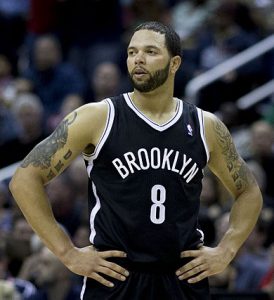 This week we will be highlighting Deron Michael Williams. He is a former American professional Basketball player who in college played for the Illinois Fighting Illini before being the third individual to be drafted in the 2005 NBA draft.  He is a three-time NBA all-star with teams, Utah Jazz and Brooklyn Nets. During the NBA 2011 lockout, he played for the Turkish basketball league and was a gold medalist on the U.S. national team at both the 2008 and 2012 Summer Olympics.

Williams was born in Parkesburg, West Virginia in 1984 to his Caucasian mother Denise and his African American father Bryon. Throughout elementary and middle school, he was very good at wrestling, claiming two state championships at only 8 and 12 years old. He was also heavily involved in basketball as he approached high school playing a prominent role on his school team at The Colony Highschool. In his senior year, he averaged 17.6 points, 8.5 assists, 6.1 rebounds, and 2.6 steals per game. Their high school team ended up having an overall season record of 29-2.

He was recruited to play college basketball by the University of Illinois for the 2002-2003 season. In his freshman year, he started in 30 out of the 32 games in the season and averaged about 4.53 assists per game. In the 2005 season as a junior, as starting point guard, he guided the team to the NACC championship game. As an NBA player, he was drafted by Utah Jazz in 2005 and played with them until 2011, from the 2007 season and on, he represented the team as starting point guard. In 2011 he was traded to the Brooklyn nets, that same year during the 2011 NBA lockout he signed a 5 million dollar 1-year contract with the Turkish` basketball Leagues team Beşiktaş. After that, he returned to play for the Brooklyn nets until 2015 when he transferred to the Dallas Mavericks. Early on, at the beginning of 2017, he transferred to the Cleveland Cavaliers where he then quietly retired after his contract ran out that same year.