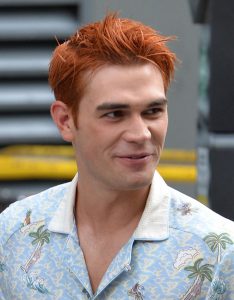 Happy Friday Everyone! My name is Allan Rempel and today I am highlighting K.J. Apa!

Was born on June 17th, 1997 in Auckland New Zealand. His father is Samoan and his mother is European.

Apa started acting in 2013, where he starred as Kane Jenkins in a soap opera called Shortland Street. He did this until 2016 when he was cast as Archie Andrews in the CW drama series Riverdale, after four months of the worldwide talent search.

In 2017, he starred as Ethan Montgomery, a teenager in the comedy-drama film A Dog’s purpose. This movie was released on the same day as Riverdale premiered on television. His next film role was replacing Kian Lawley in the 2018 drama film The Hate U Give. On May 3rd, 2019 the Netflix film The Last Summer was released. In this film, he starred as Griffin. He also starred as singer Jeremy Camp in the biographical romantic film I Still Believe, which was released in March 2020.

In 2020 Apa starred in the thriller film Songbird. In May 2021 Lionsgate Films announced he would appear in a military-based drama West Pointer.

I hope you guys learned a lot about K.J. Apa. Happy Friday!