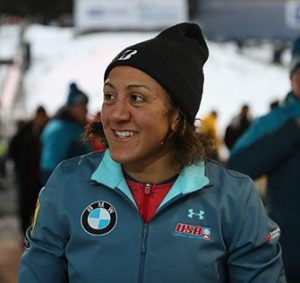 Elana Meyers Taylor was born in Oceanside, California to a white mother and an African-American father. After her birth she and her family moved to Douglasville, Georgia where she grew up. For college Elana attended George Washington University on a scholarship for softball. Elana attempted to join the US Olympic Softball team and sadly didn’t make it. Soon after that her parents said that she should try bobsledding and that’s where her successful career of bobsledding started. Elana doesn’t let her not making the softball team drag her down, she has said “One of the big reasons I was put in bobsled is to help people not only reach their goals, but come to Christ. God put me here for a specific reason and I don’t think it’s just to win medals. At the end of the day, I’m in this sport to glorify God, so if that means I come in last place or I win the gold medal, that’s what I’m going to do.” In April 2014 she married fellow bobsledder and coach Nic Taylor. In 2020, at the beginning of the COVID pandemic Elena gave birth to her son Nico. At the beginning of the 2022 Winter Olympics, during the opening ceremony Elena was supposed to be the flag bearer but was unable to attend because she tested positive for COVID-19. After making a full recovery, Elena became a monobob silver medalist and a bronze two-woman bobsled medalist in the 2022 Winter Olympic Games.