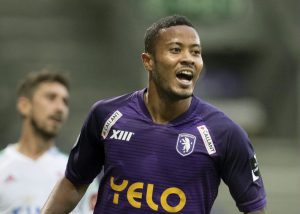 Happy Friday everyone!  Today we are highlighting professional soccer player, Musashi Suzuki. He was born on February 11th, 1994 in Montego Bay, Jamaica, but was raised in Ōta, Japan. Musashi Suzuki is of Jamaican and Japanese descent.

Suzuki currently plays, wearing number 10, for Beerschot, a professional soccer club in Antwerp, Belgium, as a Center-Forward. He began playing the sport, during second grade, when a friend invited him to a local elementary school club.

Throughout his childhood and even still today, unfortunately, Suzuki has felt the pain of racism. From name-calling to not passing him the ball, Musashi has not been treated kindly, based on the color of his skin. He recalls how the negative way people viewed him affected him. At one point, he even tried covering himself in baby powder, trying to look like “everyone else”. He no longer wanted to endure the negative looks and remarks, and felt standing up would only make things worse, as doing so had led to fights in the past.

Despite facing this prejudice, Suzuki has learned how to deal with the pain and respond to hate. After reading an especially mean and discouraging tweet one day in November of 2019, Musashi felt hurt and wrestled with how to respond. Ultimately, he chose to speak up, but also let his ability on the soccer field speak for him. In fact, the next month, Suzuki scored his first international goal for Japan! Musashi uses negative messages from others, as well as his hatred for losing, as fuel to do his best and prove them wrong; but also inspiration from other half-Black half-Japanese athletes including Rui Hachimura and Naomi Osaka. He has also received support from half-Japanese kids, aspiring to be like him.  Although racist behavior from others led him to once doubt himself, he now says “… I am proud of being half black, and I am grateful that I was raised in this wonderful country, Japan.”