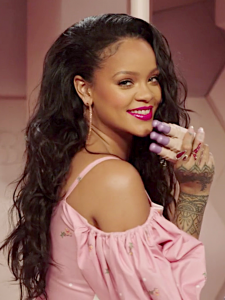 Hello, it is Famous Friday! This week we will be highlighting the pop singer, actress, fashion designer, and businesswomen Rihanna. Robyn Rihanna Fenty was born February 20th,1988, in Saint Michaels, Barbados to her mother Monica and father Ronald Fenty. Monica, her mother is of Afro-Guyanese descent while her father is of African, Irish, English, and Scottish descent. During her early life, she grew up in Barbados listening to reggae music and attending primary school. In her later years, she was enrolled in a sub-military program in which she did not complete to pursue a musical career. In 2003, Rihanna was discovered by the musical producer Evan Rodgers and was signed to their production that same year. In 2005 she auditioned for the New York City Record Label, Def Jam with new CEO Jay-Z who once hearing the live auditions offered her a contract. She accepted the contract and relocated to the United States that same year.

In May of 2005, Rihanna’s first single “Pon de Replay” was released and peaked in the top 5 chart list in about 15 countries. This song was specifical No.2 on the Billboard Hot 100 chart in the U.S. Her next release, Music of the Sun was released in August of 2005 and sold over 2 million copies worldwide. Separate from her musical career, Rihanna made her first acting debut in the film Bring it On: All or Nothing which was released in August of 2006. Throughout 2007 and 2008 Rihanna’s single “Umbrella” reached the top of the charts throughout 13 countries and was at the No.1 release in the UK for 10 consecutive weeks. This song was nominated and went on to win a Grammy for the Best Rap/Sung Collaboration alongside Jay-Z in 2008. From 2009 to 2017 Rihanna released several albums that gained immense popularity. One key moment of this period is when her seventh studio album, Unapologetic, was No.1 on the Billboard 200 albums chart in 2012. Also, she appeared on Shakira’s single “Can’t Remember to Forget You.” in 2014. In late 2015, Rihanna signed a 25 million dollar counteract with Samsung that would promote the release of her eighth album, along with its supporting tour. Currently, Rihanna is working on a new album with some co-song writers such as Collin Edwards and Monique Lawrence and has signed with ATV Music Publishing to release her long-awaited album.