Happy Friday Everyone! My name is Allan Rempel and today I am highlighting Mike McDaniel! He is the new coach for the Miami Dolphins!

Michael Lee McDaniel was born on March 6th, 1983. He was born in Aurora, Colorado. He graduated from the school Smoky Hill High School in 2001. McDaniel got a history degree from Yale. 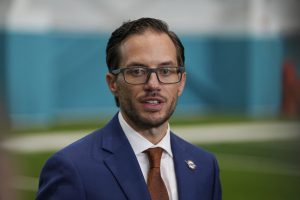 McDaniel was hired in 2005 by the Denver Broncos. Mcdaniel was 22 years old at the time. He was hired as a coaching intern under head coach Mike Shanahan. That season ended up being their best season, with a record of 13-3 and making it to the AFC Championship game, since John Elway’s retirement 6 years prior.

In 2006 McDaniel was hired by the Houston Texans as an offensive assistant under head coach Gary Kubiak. In 2009 he was hired by the Sacramento Mountain Lions as a running backs coach in 2009.

McDaniel was hired by the Washington Redskins as an offensive assistant in 2011. He ended up working with Mike Shanahan as the head coach again. McDaniel wired with 3 other future head coaches; Kyle Shanahan, Sean Mcvay, and Matt Lafleur. He was then promoted to wide receivers coach in 2003.

McDaniel was hired by the San Francisco 49ers as their run game coordinator under new head coach Kyle Shanahan in 2017. In the 2019 season, the 49ers appeared in Super Bowl LIV where they lost to the Kansas City Chiefs. McDaniel was promoted to offensive coordinator. He made it to the NFC Championship Game in the 21/22 and lost to the Super Bowl champion Los Angeles Rams.