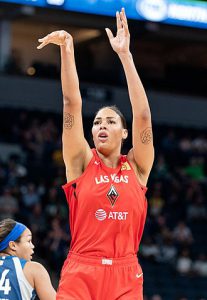 Hello, it is Famous Friday! This week we will be highlighting Elizabeth Cambage who is a multiracial professional women’s basketball player in the WNBA. She was born on August 18th, 1991 in London to a Nigerian father and Australian mother. Throughout her early life, she lived in Australia wherein school she was continually teased for her height. When she was 10 at her mother’s suggestion, she began playing basketball as a way to make friends.  In 2007 at the age of 16, she accepted a scholarship into the Australian Institute of Sports and played for their team in the Women’s National Basketball League.  In the early years of her career in 2009, she played for the Under 20 Australian National Championships.

In 2011 she was drafted by the WNBA team the Tulsa Shock in the U.S. and played in the WNBA All-Star Game. Later on, in 2018, she signed a multi-year contract with the Dallas Wings. That same year she was voted into the 2018 All-Star Game presenting it as her second All-Star appearance. In 2018 she also claimed the highest WNBA single-game scorching record with her 53 earned points in a game against New York Liberty.  In 2019 she requested a trade from the Wings and was traded to the Las Vegas Aces. During this 2019 season, she was accepted into the 2019 All-Star Game for the 3rd time in her career and finished out the season by leading her team into the semi-finals.