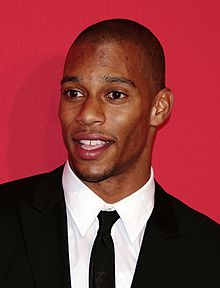 Happy Friday everyone! This is Allan Rempel today with another Famous Friday. This article will highlight the career of Victor Cruz.

Victor Cruz was born on November 11, 1986. Cruz played in the NFL for 8 seasons. Victor Cruz’s father was African American, and his mother is Puerto Rican.

Cruz’s high school career was very successful where he attended Paterson Catholic High School. Cruz had 47 catches for 869 yards and eight touchdowns in his single season at Bridgtown Academy. At Paterson Cruz earned All-State honors as a senior in 2003, that year the team went undefeated with an 11-0 record.

Cruz finished his college career with 131 catches, this made him fourth on the all-time UMass receptions list. Cruz was named a first-team All-Colonial Athletic Association.

Cruz went undrafted in the 2010 NFL Draft and was signed the day after the draft by the New York Giants. In 2011 the New York Giants went into the playoffs with a 10-6 record. The Giants end up making Superbowl against the New England Patriots. Cruz had caught 10 passes for 142 yards just in the first half! The New York Giants then went on to win the Superbowl in overtime 20-17.

From 2013 to 2015 Cruz kept coming in and out of injury. In 2016 Cruz got fined $12000 for excessive celebrating. In 2017 Cruz was picked up by the Chicago Bears but was released in the same year. Chicago Bears would be the last team Cruz would play for.

On August 21, 2018, Cruz announced that he would retire and joined ESPN as an analyst. Cruz signed a one-day deal with the New York Giants so he could retire with them. Cruz went on to host the first season of MTV’s The Challenge.

On November 15th, 2021 Cruz announced he has joined Prophet Exchange as a strategic partner and advisor.

This is the career of Victor Cruz, thank you for reading!