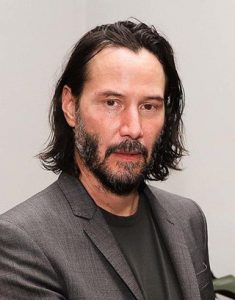 Keanu Reeves was born in Beirut Lebanon, on September 2, 1964. His mother was a costume designer and performer. His mother is from Essex, England and his father is from Hawaii, and is native of Hawaiian, Chinese, English, Irish, and Portuguese descent.

Keanu’s mother had four different husbands, her first husband abandoned Keanu and his mother when he was 3 years old and last saw him when he was 13. After his parents officially divorced in the late 1960’s he and his mother moved to Australia and then New York where his mother met a Broadway and Hollywood director named Paul Aaorn. In 1971 Paul and Keanu’s mother got divorced, but Paul and Keanu stayed in touch because Keanu had started acting through his school. Paul noticed Keanu’s skill and recommended him a job at the Hedgerow Theater in Pennsylvania. In 1976 Keanu’s mother married a rock promoter and eventually got divorced in 1980. Keanu went to four different high schools, one of which he got expelled from because he was a bit too rambunctious. Keanu said that he “was not generally the most well-oiled machine in the school. He eventually became a successful ice hockey goalkeeper and decided that he wanted to be on the Canadian Olympic ice hockey team. Later on he officially decided that he wanted to be an actor. Keanu dropped out of high school at 17. Keanu went to De La Salle College, and then eventually left. After that he attended Avondale Secondary Alternative School, which allowed him to get an education while working as an actor. After college Keanu took up acting as a career and became a very large influence in the acting world starring in many movies even till today.