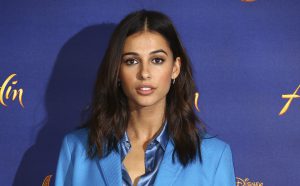 It is the first Famous Friday of the year, and we are kicking it off with actress and singer Naomi Grace Scott. She was born on May 6, 1993 in Hounslow, London, and later moved to Woodford, London at age 8. Scott is Ugandan-Indian and English.

As her parents were pastors at their church, Naomi began singing with her church’s youth band named the ‘Bridge Church Youth Band’. Here is where a member of the British R&B girl band ‘Eternal’ Kéllé Bryan, found her. Through this connection, Scott signed a deal with the same entertainment agency as Kéllé. In 2014, she released her first EP ‘Invisible Division’. Later in 2016 she released her second EP ‘Promises’. She has gone on to produce multiple singles including ‘Vows’ (2017), ‘So Low’ / Undercover’ (2018), and ‘Irrelevant’ (2018).

Besides singing, Naomi acts as well, and in 2009 she got her first big break as the character ‘Megan’ in ‘Life Bites’ – a Disney Channel UK series. The following year, Scott landed a lead role in the iconic Disney movie ‘Lemonade Mouth’, as ‘Mohini “Mo” Banarjee’. Her solo song “She’s So Gone”, from the film, even climbed to 3rd on the ‘Bubbling Under Hot 100 Singles’ chart’! This was also her first time acting for an American production company.

She had also appeared in several projects including the film “The 33”, the television series ‘Terra Nova’, a music video of the song ‘Hurricane’ by Bridgit Mendler (Scott’s co-star in ‘Lemonade Mouth’); as well as two short films and an episode of the British series named ‘By Any Means’. In 2015, Naomi landed the role of ‘the Pink Ranger’ also known as ‘Kimberly Hart’ from the movie ‘Power Rangers’, which was theatrically released March 24, 2017. This role gained Scott her first nomination for the ‘Teen Choice Award’. Naomi also starred in the remake of ‘Aladdin’ released in 2019, as Jasmine. The film grossed a total of $1.051 billion USD worldwide! In this movie she sings the song ‘Speechless’, where she is complimented by critics and journalists for her performance. It was for this role that she won the Teen Choice award for Choice Sci-Fi/Fantasy Movie Actress in 2019. She also played the role of ‘Elena’ in ‘Charlie’s Angels’ in 2019.

Naomi Scott certainly has a range of accomplishments in her resume! Along with all this, she supports the Christian charity Compassion International, an organization that sponsors families and children who live in poverty, as a UK ambassador. She is also married to English soccer player Jordan Spence, and the two met at church when she was 16. You can look out for her in the movie Distant, which is set to premiere this September!