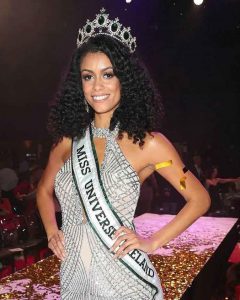 Hello everyone! And welcome back to Famous Friday! Today we will be talking about Fionnghuala O’Reilly, who is a famous Multiracial Actress, Model, Engineer, and Pageant Title Holder.

O’Reilly was born on August 20th, 1993, in Fort Knox, Kentucky, to her Irish father and African American mother. She signed her first modeling contract when she was 19 years old with an agency located in Milan, Italy. She, later on, went to receive her bachelor’s degree in Science of Systems and Engineering from George Washington University in Washington D.C. She has used this degree to become a NASA Datanaut and regional director of NASA’s Space Apps Challenge in Washington D.C.

In 2017 she competed as Miss District of Columbia USA 2018, where she placed as third runner up. Later on, in August of 2019, she competed as Miss Dublin in the Miss Universe Ireland 2019 pageant. She won this pageant in a historic movement in that she was the first woman of color to be crowned a winner since 1961. Then she later went on to represent Ireland in the Miss Universe 2019 pageant, her platform highly emphasizing the need for diversity and women in STEM (science, technology, engineering, and math). Although she finished unplaced in this competition, she continues to be an inspiration to many young individuals throughout the world.