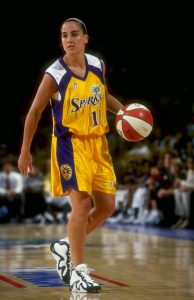 Happy Friday Everyone! My name is Allan Rempel and I am going to share with you guys an athlete named Jamila Wideman!

Jamila Wideman was born on October 16th, 1975. Her father is African American and her mom’s race is unknown.

Jamila Wideman started her career when in seventh grade she was starting for varsity. She started for varsity six years in a row. Wideman averaged 17 points 6 steel 6 assists and 6 rebounds per game. While in high school Wideman began to write in her school new papers about her racial identity. She wrote and published a poem called Black.

Jamila Wideman attended Stanford University, she completed a double major, earning a B.A. Wideman continued her basketball career into high school, she was 5’6 makeing her the smallest player on the team.

In 1997 Wideman was drafted third overall in the WNBA being picked by Los Angeles Sparks. Wideman played 4 seasons in the WNBA. She played for Los Angeles Sparks, Cleveland Rockers, and Portland Fire. In the 1999-2000 winter season, Wideman went to Israel and played for the Elitzur Ralma club in the Israeli basketball league. They won the national championship in 2005.

In the off seasons of the WNBA, Jamila Wideman would direct the Stanford Athletic Alliance. Wideman started a youth program called “Hoopin’ with Jamila” This program combined basketball clinics with a reading and writing program. This program was targeted towards young women of color incarcerated in the juvenile justice system in Los Angeles. USA today honored Wideman as the “Most Caring Athlete” in 1998.

Thank You Jamila Wideman for all you have done, the multi-racial community thanks you.