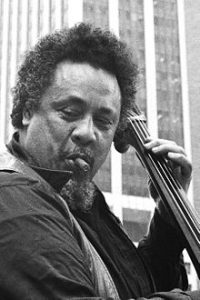 Charles Mingus Jr. was a multiracial American Jazz double bassist, composer and pianist. He is considered to be one of the best jazz musicians of all time. He had a career that spanned over a course of  three decades. Throughout his career he collaborated with other popular jazz musicians such as Duke Ellington, Charlie Parker  and Louis Armstrong.

He was born in 1922 in Nogales Arizona to his mother who is of Asian, English and South-American descent and to his father who was of African American and Swedish descent. Throughout his childhood his family was very involved in listening to religious music. This helped develop young Mingus’ love for music and helped him develop a love for other music as well such as the work of Duke Ellington. He studied many instruments such as the cello and the trombone.

During his teen years he began to write complex advanced pieces of music. These earlier works of music are jazz prices that also have elements of classical instrumentation in them as well. Later on in 1960 a number of them were recorded. In 1943 he toured with Louis Armstrong and later on by 1945 he was recording with his newly found band in Los Angeles. Later on in his career in the 1970s he formed a quintet with Don Pullen, Jack Walrath and George Adams and together they formed 2 albums. Changes One and Changes Two.

Sadly he later died in 1979 on January 5th at the age of 56 after suffering with motor neurone disease. Charles Mingus Jr’s music is still being performed and reinterpreted by The Mingus Big Band, Mingus Orchestra and the Mingus Dynasty. His memory, music and legacy will always continue to live on throughout the decades.