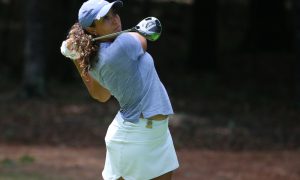 Calling all golfers! Today we are highlighting professional golfer Cheyenne Nicole Woods. She was born on July 25, 1990 in Pheonix, Arizona to Susan Woods and Earl Dennison Woods Jr. Woods. Woods is of Black, Native American, Asian and White descent.

Like her half-relative, Tiger – who I wrote about a few months back, Cheyenne Woods began playing golf at a young age (5), and was first coached by her grandfather Earl Woods. Since then she has built her golf resume quite a bit. This includes starting with her high school golf career where Woods was the high-school state champion in Arizona two consecutive years (2006-07). In college she played for Wake Forest University. During this time, in 2009, she was given a sponsor’s exemption to play in The Wegmans LPGA tournament, but she unfortunately missed the cut by 4 strokes. In 2011, still playing for Wake Forest, Cheyenne won the Atlantic Coast Conference. In 2012, she turned professional and in August, gained her first professional win in The SunCoast Ladies Series mini-tour. From there Woods has gone on to play in The Ladies European Tour (2013), The Volvik Australian Ladies Masters (2014) – here she claimed first place, and her first victory at a major golf tour, as well as other tournaments and events. Earlier this year, she also secured her 3rd professional win in the Sun City Country Club.

Using the platform she has gained from her golf career, Woods has been a role model for women and girls, as well as an advocate for diversity in golf, and overall social justice. After the murder of George Floyd, she spoke to Golfweek about the importance of speaking out if you have a platform, like several athletes do. In 2020, she also joined Doug Smith, IMG staffer, to co-host the podcast “Birdies not BS”. In an episode, they discussed systemic racism in golf. They also interviewed some of the smartest players in golf. Finally, Woods has made it a point to facilitate opportunities for African American girls in the U.S. to play golf. She recently helped the Race For Unity fundraiser which gives young black girls The Renee Powell Grant, allowing them to enjoy the game of golf.

It is amazing that Cheyenne uses her platform to stand up for those in need, and stands up for others. It’s also great to see a multiracial woman gain success and blaze the trail for the upcoming generation of girls. Also, congratulations on her recent engagement to Aaron Hicks, the New York Yankee’s center fielder!