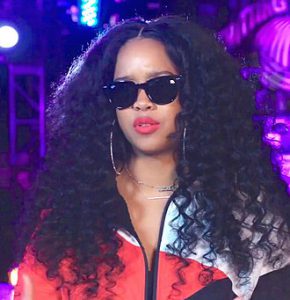 Hello Everyone! And welcome back to another week of Famous Friday.

This week’s article is about Gabriella Sarmiento Wilson, professionally known as, H.E.R. who was born June 27th, 1997 to African American father Kenny Wilson and Filipina Mother Agnes Wilson. She was raised in California’s Francisco Bay area. She has loved performing from a very young age. Under the name of Gabi Wilson, she began her acting debut starring in the Nickelodeon show School Gyrls at the age of 9. When she was 10, she performed an Alicia Keys song on the piano for the Today’s Show. Later on that year, in 2007 she performed at Apollo theatre covering Aretha Franklin’s song “Freeway of Love”. In 2010 she performed at the BET awards covering Alicia Keys’ “Fallin’” and later on in 2012 competed on Radio Disney’s The Next Big Thing with her song, “My Music”, which was played on Radio Disney.

In 2011 at the age of 14, she signed a record deal with Sony’s RCA Records, and a single album, “Something to Prove” was released. In late 2016 she emerged with a new stage name H.E.R and presented the debut of the album EP H.E.R Vol.1 in early September. Rolling Stones included H.E.R in their “10 Artists You Need to Know” roundup. She created a follow-up album EP H.E.R Vol. 2 released June 16, 2017, later on, that year, she presented EP H.E.R Vol. 2, The B sides. She combined all 3 of these albums in late 2017 and created the H.E.R album, which won Best R&B Album and received 4 other Grammy nominations in the 61st Grammy Awards.

Further along in her career, she sang Prince’s song “Nothing Compares 2 U” in the Memoriam segment of the 72nd Primetime Emmy Awards. In February 2021 during the pre-game festivities for Superbowl LV, she performed “America the Beautiful” and she appeared as herself in the movie Yes Day released March 12, 2021. In June of 2021, her new single “Damage” topped the US R&B radio charts.