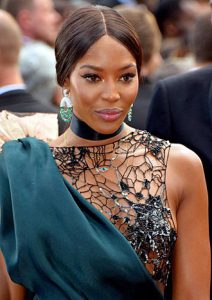 Hello everyone! And welcome back to Famous Friday! Today we will be talking about Naomi Campbell, who is a famous businesswoman, singer, actor, and supermodel. She was born May 22nd, 1970 in Streatham, South London to her mother Valerie Morris, a Jamaican-born dancer and to her father who is of Chinese-Jamaican descent.

She spent her first years living in Rome, Italy as her mom worked as a modern dancer. Throughout her childhood, she also lived with her grandparents and other relatives as her mom traveled throughout Europe as a dancer. During her childhood, she was very involved in theatrical arts from a very young age. When she was 10, she was accepted into the Italia Conti Academy of Theatre Arts and studied ballet.

At 7 years old,  she made her first public appearance in Bob Marley’s “This Is Love” music video. Similarly, when she was 12, she tap-danced for Culture Club’s “I’ll Tumble 4 Ya” music video. Her career continued to progress, and eventually, she started modeling for designers such as Gianni Versace, Azzedine Alaïa, and Isaac Mizrahi. In 1987 she was featured on British Vogue and was the first multiracial model to be on the cover of French Vogue.

In 2013, she was on the reality television and modeling show, The Face, on which she served as a coach and a judge. She has also been involved in other television shows such as Star and Empire. In June of 2018, she received the Fashion Icon award from the Council of Fashion Designers of America. In 2019, she signed the first beauty contract of her career with NARS cosmetics. In 2020, she created a youtube channel called No Filter with Naomi, and in October, a documentary about Campbell and fellow supermodels was issued called The Supermodels.

Throughout her career, she has also been an activist for models of color. She has witnessed firsthand unequal pay between models of color and white models. She has experienced how models of color have to work harder to overcome the hardships resulting from racism. She continues to speak out and stand against racial discrimination and has continually addressed the major racial biases that reside within the fashion industry.