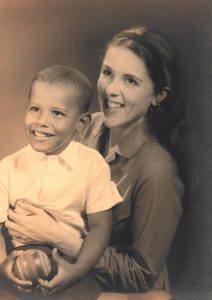 Today’s Famous Friday is about the mother of the world’s most famous Multiracial man, Barack Obama, the 44th president of the United States. Stanley Ann Dunham (November 29, 1942 – November 7, 1995) was an American anthropologist who specialized in the economic anthropology and rural development of Indonesia. She was known as Stanley Ann Dunham through high school, and resumed her maiden name, Ann Dunham, later in life. In an interview, Barack Obama referred to his mother as “the dominant figure in my formative years … The values she taught me continue to be my touchstone when it comes to how I go about the world of politics.”

Barack Obama had endearingly described her as “a white woman from Kansas” at the 2008 Democratic National Convention. But Stanley Ann Dunham hadn’t merely been Barack Obama’s mother, nor just a biracial anecdote.

Her father, Stanley Armour Dunham, named her after himself because he wanted a boy. Her family moved frequently due to her father’s work for the United States Army before settling on Mercer Island in Washington State in 1956, where Dunham academically excelled.

Famous in her own right, she had pioneered a model of microcredit that pulled millions of people in Pakistan and Indonesia out of poverty. Funded by the U.S. Aid for International Development (USAID) and World Bank, the Indonesian government employs it to this day. To address the problem of poverty in rural villages, she created microcredit programs while working as a consultant for the United States Agency for International Development. She also was employed by the Ford Foundation in Jakarta and consulted with the Asian Development program in Pakistan. Towards the latter part of her life, she worked to apply her research to the largest microfinance program in the world.

While enrolled in the University of Hawaii at Manoa she met a man named Barack Obama Sr. while attending a Russian language course. Within a year, the two were married.

Dunham was three months pregnant when they married on Feb. 2, 1961. While both families were opposed to the union, Dunham was adamant and enamored. She gave birth to Barack Hussein Obama on Aug. 4. It was something of a radical move at a time when nearly two dozen states still prohibited interracial marriage.

Ultimately, the couple separated. Dunham studied at the University of Washington for a year before returning to Hawaii, and Obama Sr. enrolled at Harvard. They divorced in 1964.

When she returned to Hawaii to finish her bachelor’s degree in anthropology, she enlisted the help of her parents to raise the young Barack. Paralleling her past, she fell in love with a fellow student yet again. Lolo Soetoro had enrolled on a student visa from Indonesia, and he and Dunham were married by the end of 1965.

Soon she was pregnant, and gave birth to Barack Obama’s sister, Maya Soetoro-Ng. But after four years in Jakarta, Dunham realized her son’s education would best be served in Hawaii. Juggling both work and a graduate thesis, she decided to send 10-year-old Obama back to Honolulu to live with his grandparents in 1971.

Stanley Ann Dunham died in Manoa, Hawaii on Nov. 7, 1995, just shy of her 53rd birthday. Her last year was spent fighting insurance company claims that her cancer was a “pre-existing condition,” and trying to get reimbursements for treatment. Barack Obama would later cite that experience as laying the groundwork for his push for healthcare reform.

Then, more than a decade after scattering his mother’s ashes into the pacific waters of Hawaii, Barack Obama was elected president — inspired by “a white woman from Kansas” to change the world.