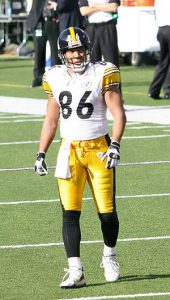 Happy Famous Friday Everyone! This week’s article is about football coach and former Pittsburgh Steelers wide receiver Hines Ward Jr. Born March 8, 1976, in Seoul South Korea to Korean mother Kim Younghee and African- American father Hines Ward Sr. When Ward was one year old his family moved to Atlanta and East point Georgia. Ward was the quarterback for his school’s football team at Forest Park County High school. During this time, he was a two-time award winner of the Clayton County Offensive player of the year.

In college at the University of Georgia, Ward played as a wide receiver and tailback for the Georgia Bulldogs. In his sophomore year, Ward played a portion of the season as a quarterback, and he holds the Georgia bowl game records for pass compilations, pass attempts, and passing yards during the 1995 Peach Bowl. In this game, he completed 31 out of 59 passes for 413 yards. Although he had a strong sophomore year as a quarterback, Ward primarily played receiver his final two years of college.

Coming out of college, Ward was considered one of the top 5 wide receivers in the 1998 NFL draft. Later on, it was discovered that Ward was missing an ACL in his left knee due to a childhood accident. However, this did not stop him; he was selected by the Pittsburgh Steelers in the third round (92nd overall) of the 1998 NFL draft. He signed a 3-year $885,000 contract with the Steelers. He began the season as the fourth receiver in the steelers’ depth chart.  Ward became a very successful player from 1998-2001, and at the beginning of the 2001 season, he signed a 4-year 9.5 million dollar contract with the Steelers. At the time of the 2005 season, he assisted his team in winning Super Bowl XL, 21-10. He sealed the victory by catching a 43-yard pass and scoring a touchdown. He was named the MVP for Super Bowl XL and, this made him the second foreign-born player to ever receive this honor. During the 2008 season, he helped his team with Super Bowl XLIII as well. Ward played for the Steelers until 2012 when he retired from the NFL.

In August 2017, Ward began working with the Pittsburgh Steelers offensive training, working with their wide receivers. Later on, in 2019, he was hired by the New York Jets and became one of their full-time offensive assistant coaches. During his career, he went back to his birthplace in Korea and developed the Hines Ward Helping Hands Foundation. This is a foundation to help Multiracial children like himself in South Korea feel accepted since they have suffered discrimination. In Korea, the foundation continues to assist Biracial children and helps them overcome adversity within their community.