Happy Friday everyone I am Allan Rempel, and today I am going to be highlighting Lauren Ridloff! 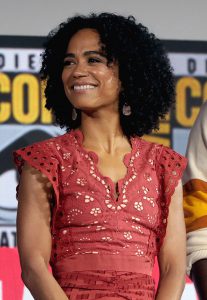 Lauren Ridloff is an actor and will be acting in the film Eternernals movie, she plays the character Makkari. Lauren Ridloff was born in Chicago Illinois, she was born deaf and to hearing parents, An African American mother, and a Mexican American father. She was enrolled at a catholic school with hearing children, she later stopped using her voice so that her intelligence was not judged because of it. After Catholic school, her parents sent her to the model secondary school for deaf in Washington D.C., where she was among deaf peers. She began exploring the arts where she began to involve herself in drama. In a school production of The Wiz, she played Dorothy. She was also on the Cheerleading team becoming one of the first deaf people to compete internationally.

Lauren Ridloff decided to go to California State University, Northridge. This is a college with a high population of deaf and hard hearing students. Lauren Ridloff after college won the National Association of the Miss Deaf America.

In 2017 Ridloff Joined the film Wonderstruck as a consultant and was cast a small role. When director Kenny Leon started the 1980 play Children Of A Lesser God revival, he hired ridloff to tutor him in sign language. Leon cast Joshua Jackson as the male lead role but had not yet cast the female lead role. Leon asked Ridloff to subtitle at the read-through early on, and based on her performance, she got the role. Ridloff also played Connie in the ninth season of the Walking Dead. In July 2019 she has cast the role of Makkari in the movie Eternals.

Lauren Ridloff will not stop acting any time soon, I am so excited to see her play Makkari in the Eternals!