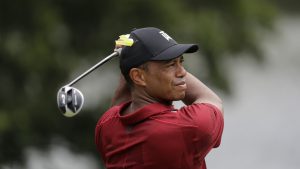 Happy Friday everyone! Today we are highlighting Eldrick Tont “Tiger” Woods. He is a professional American golfer, whom I’m sure we have all heard of! Infact earlier this year, a Famous Friday article was written about his son who also enjoys the sport.

Tiger Woods was born in Cypress, California on December 30, 1975 to his parents Earl and Kultida. Woods is of Caucasian, Black, American Indian and Asian descent, or as he calls it “Cablinasian”.

From an extremely young age, Woods began playing golf, and by two years old he could be seen on television swinging a golf club. He was a child prodigy! When he was 15, he became the youngest person to win the U.S. Junior Amateur titles. Three years later in 1994, he won his first of three consecutive U.S. Championships. Woods enrolled in Stanford University that year and won the collegiate title in 1996. After winning the U.S. Amateurs for the third time, Woods decided to leave college and turned professional on August 29, 1996. He went on to play professionally in eight PGA events that year, bringing home two titles along with being named PGA Tour’s Rookie of the Year. In 1997, at age 21, Woods won the Masters Tournament with a record of 12 strokes. It was the greatest performance by a professional golfer in over a century. He was the youngest professional golfer to win the Masters. He was also the first person of African or Asian heritage to win a major (majors are the four most prestigious annual tournaments in professional golf, including the Masters). Over his golf career Woods has won 82 official PGA Tour events, which include 15 majors, he has obtained many other achievements as well. On another note, he has even earned the Presidential Medal of Freedom! Woods is also the highest paid golfer.

In 1996, Woods and his father Earl established the TGR Foundation with the goal of promoting golf among inner-city children. They wanted to create and support community programs that improved the education, health and welfare of all children in America. The focus of the TGR foundation is to empower minorities and unperiveleged minority students by giving resources and supporting them in their academic journey and beyond. It is great to see how Woods uses his fame, success and resources to help and empower the marginalized, while also doing something he loves – golf!