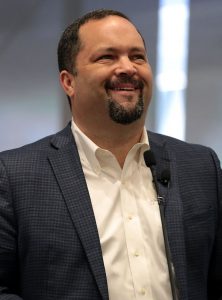 Benjamin Jealous is a Multiraical American civil rights leader and a social impact investor. He  was born 1973 in Pacific Grove California to his Biracial Mother Ann Jealous and his white father Fred Jealous.

Jealous went to Columbia University and earned a Bachelor of Arts degree in political science. While at this school he began working with the NAACP Legal Defense Fund, in the same year, he also worked as a reporter for the Jackson Advocate in Mississippi which is Mississippi’s oldest Black Newspaper. He eventually became the newspaper’s managing editor. During this time, he reported and exposed the corruption within the State Prison in Parchman. Later on,  he returned back to Colombia in 1997 where he was awarded a Rhode Scholarship which gave him the opportunity to study at St. Anthony’s College, a section of Oxford.  While he was there, he received a Master of Science award in comparative social research.

After completing his degree at Oxford, Jealous returned to the US. Upon returning, Jealous worked as an Executive Director of the National Newspaper Publishers Association (NNPA) , a group of over 200 black community newspapers. After his time at the NNPA,  he served as the director of the US Humans Rights Program at Amnesty International.  While in this role, Jealous focused on promoting government legislation against racial profiling. In 2005, Jealous became president of the Rosenberg foundation which is a private organization located in San Francisco.

Jealous stayed at the Rosenberg foundation until 2008 when he became the president and CEO of the National Association for the Advancement of Colored People or the NAACP. At 35 years old,  he was the youngest person to assume that position. As president, he headed national programs on criminal justice, environmental justice, voting rights, and health. He also advanced existing programs, and opened the NAACP financial freedom center.