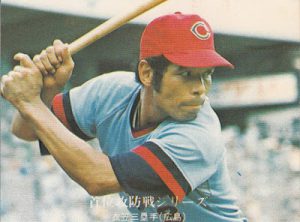 Hello Everyone my name is AJ Rempel, the President of Project Race kids. Today is Friday! I would like to highlight Sachio Kinugasa.

Sachio Kinugasa was raised by his Japanese mother while his father, who was an African American dad was stationed in Japan after WWII.

After his high school career, he was signed by the Hiroshima Carp, in 1965 and had many years in the minors. He was a catcher until an injury and switched to a first basemen in 1968. He became the team’s starting first baseman and hit 21 home runs with .276 batting average. In 1975 he moved to 3rd base at the suggestion of manager Joe Lutz. His efforts helped the Hiroshima Carp to win their first ever league championship. He led the league in most stolen bases in 1976,in 1984 he won the Central League’s MVP award as his team won the Japanese Championship Series.

Sachio Kinugasa was nicknamed Tetsujin which means Iron Man after the robot manga “Tetsujin 28.” Sachio played in games when he was badly injured, including bone fractures. He last missed a game on October 18, 1970, and set the Japanese most consecutive games played record on August 2 1980. He tied Lou Gehrig’s record of 2,130 consecutive games played on June 11 1978, Sachio retired after this season. After his retirement he became a sports commentator.

Sachio Kinugasa died in 2018, he died of colon cancer, may he Rest In Peace.