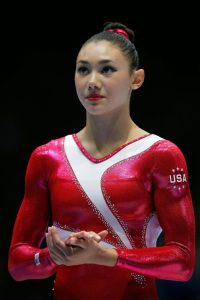 On October 14th, 1996 in Honolulu, Hawaii, Kyla Ross, a multiracial gymnast was born. Kyla Ross’s father’s (Jason Ross) ethnicity is of African American and Japanese ancestry. Her mother (Kiana Ross) is of Filipino, German, and Puerto Rican descent. She has two siblings named McKenna and Kanye.

Kyla was a member of the US women’s gymnastics team and she was in the 2016 Rio summer Olympics, on the US team. In the Olympics she won a gold medal with her team. From different competitions, in total, she has 14 gold, 11 silver, and 4 bronze medals. She was also named All-American 11 times, which means that she was one of the top 8 gymnasts in specific events.

At a young age Kyla’s parents knew that she was a strong child and that she would join gymnastics. Her parents said that they even had trouble putting her in a car seat because she would fight them. She also was able to go across the monkey bars and climb up and down jungle gyms with ease. She started gymnastics at three years old. As time passed her coach Jenny Zhang wasn’t sure about Kyla’s future because she said, “she had a square body, no legs and square shoulders.” However, between 2005 and 2007 Kyla started to have success in gymnastics. She competed as a level ten gymnast, which is the highest level for junior gymnasts. She won five state titles and two national titles. She joined the junior Olympics and won the balance beam, floor exercise, and finished second on vault. As time went on she entered more competitions and withdrew from others due to physical injuries. In 2013 at the Chemnitz meet, she helped the US finish in first place and won the individual all-around with a total score of 59.300. She was the last gymnast to beat Simone Biles at an international all-around competition.

On March 12, 2020 Kyla decided to retire from elite gymnastics so that she could focus more on college. Although she won’t be entering the Olympics anymore she will always be remembered as one of the best female artistic gymnasts in the world.