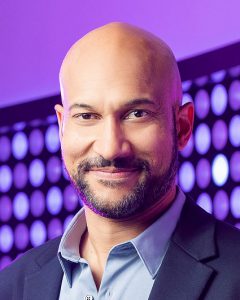 Happy Friday! This Friday we are highlighting Keegan-Michael Key.  He was born March 22, 1971 and is of White and Black ethinicity. At a young age he was adopted, and his adoptive parents were a Black man and White woman, like his birth parents.  He is an American writer, producer, actor and comedian.

Key has worked on several movies and series throughout his career thus far.  This includes having a recurring role on Parks and Recreation (2013-2015). Along with this he has done voice acting for movies such as The Lego Movie, Toy Story 4 and The Lion King (remake).  Keegan-Michael Key has also worked on many other films and TV series.

Key has worked with Young Storytellers.  This program helps improve self-confidence, writing and literacy in students who face poverty in LA, Burbank, Santa Monica and Culver City, in California.  Elementary, Middle and High School students learn the fundamentals of how to create a dramatic narrative by working with mentors, often industry writers like Key.  Their creation is then brought to life by volunteer actors.

Keegan-Michael Key is now hosting the show Brain Games.  In the upcoming years, you will also see him in movies like the remake of Pinocchio, as well as other projects.